I created the image above using the OODA loop, a decision model originally created to help fighter pilots make better decisions in combat. The OODA loop can help you become a better photographer, the same way it has helped me.

The OODA loop was originally created by U.S. Air force Colonel John Boyd. Boyd, known as 40 Second Boyd, had a standing bet to down any opponent in 40 seconds or less. He never lost.

Later in life, Boyd became known as a master strategist. The OODA loop was incorporated in his strategic framework, Maneuver Conflict. From there, the OODA loop, often in a hopelessly distorted form, spread to business strategy. Bill Dettmer wrote a business strategy book about it, and that is where I found it, several years ago.

I won't go into the details of the OODA loop here. I have written a book about it (Tempo!, available in Swedish only), blogged about it, and made videos about it.

What I will do here is show how I applied it to identify an opportunity, and turn it into a good photo.

I was just about to cross a bridge when I saw two or three people climbing up the banks of a frozen canal. Nearby them, something glinted on the ice.

This was my first iteration through the OODA loop: I observed movement in a location where my orientation process told me there normally is none. I decided to have a closer look, and acted by simply raising my camera and looking through the lens. I could see there was a chair on the ice.

There was enough potential there for me to walk to the other side of the canal, and get as close as I could. When I was in the best position I could find, I took several shots. The one you see above was the best. Not too inspiring, but it had potential. 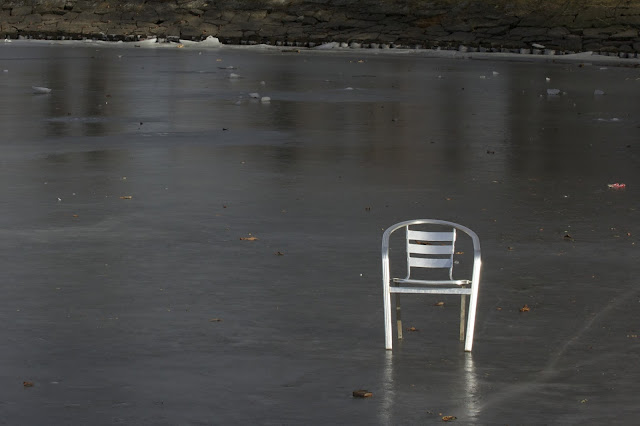 One more round of observing, orienting myself using basic rules of composition, deciding to crop, and acting on my decision. I had the picture you see above.

I observed that the photo still wasn't good enough. I wanted a cleaner photo with more contrast. I wasn't happy with the angle of the line in the upper part of the picture, but I had decided not to risk my life by going out on the ice. I am glad I did.

Here is the image after cleaning up in Aperture. I have used Clone and Repair to remove a lot of garbage from the ice. I have also:

This is what the picture looked like when I first published it. I knew it would be better if I straightened the line at the top of the picture, but frankly, I was too lazy to do it. 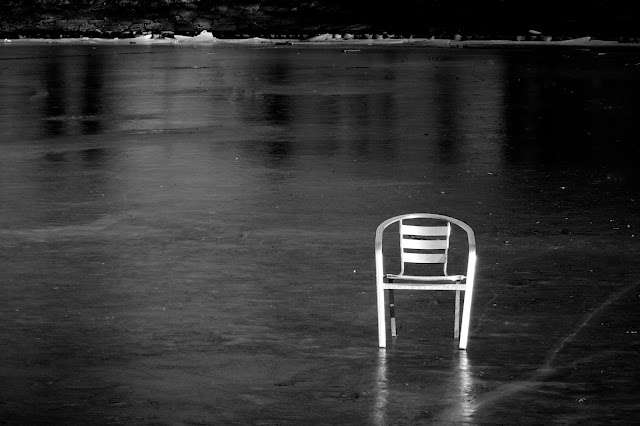 Recently, I needed the photo for a presentation, and decided I could not stand the sloping line, so I straightened it in Pixelmator. I could have used Morph Age Pro for more control, but decided Pixelmator did a good job of it.

And that is how photographers can shoot like fighter pilots.
Posted by Kallokain at 09:21 No comments:

Three photographers and one model: Shooting My 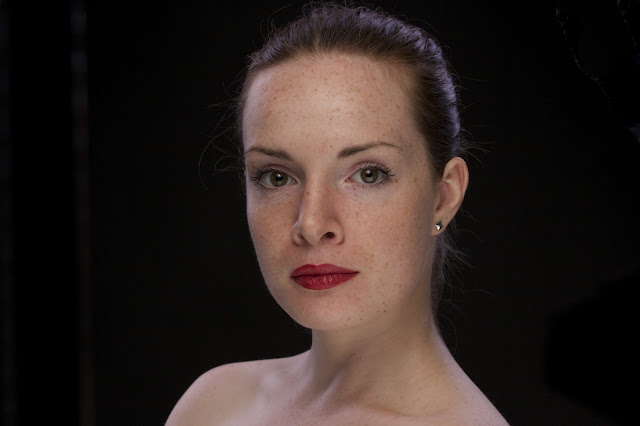 Photographer Tomas Gillberg invited the photographers in a Facebook photography group to do a model shoot for fun and practice. Peter Sandin, another photographer, and I, took Tomas up on it. Tomas asked a model, My Hesser, if she would be interested in a shoot with us, and she was. Tomas lives about an hour's drive from Gothenburg. Peter and I had a nice trip to Tomas's studio. Lot's of photography talk.


Tomas, Peter, and I had about an hour to plan before My arrived. We pretty much stuck to the shooting plan for the occasion, but I must confess, I'd jump at an opportunity to do a portrait shoot.

I have a thing for doing portraits that show off a person's interests and personality, sometimes with a trick shot twist. My has danced ballet, and studies genus science.  Genus science and ballet would be an interesting combination to shoot. 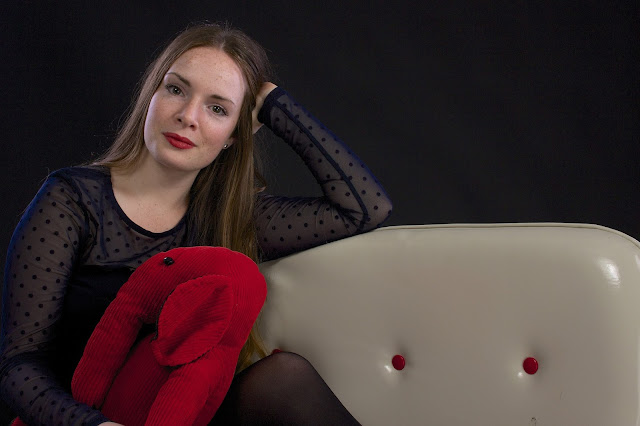  Experimentation was the name of the game, so we shot My while she was standing, while sitting, with the photographer standing, lying on the floor, or climbing a ladder. We used both light and dark backgrounds, and several lighting variations. I found a red toy elephant Tomas uses when shooting children, and as you can see, we tried using that too. 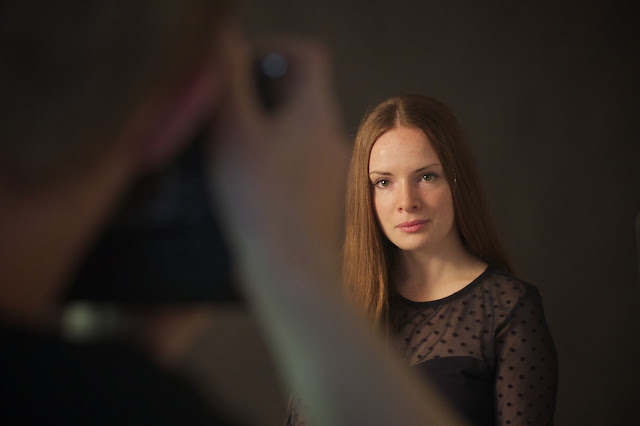  It is of course taxing for one model to keep up with three photographers, but My did. The lunch break was more than welcome though. It allowed us to recharge a bit, before shooting in the afternoon. 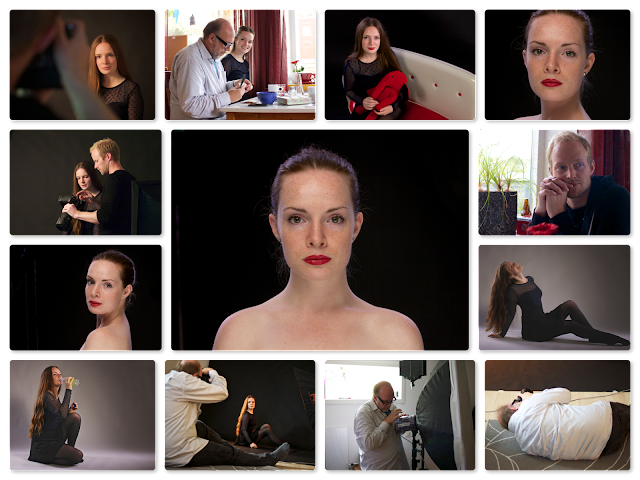  
A hectic day of shooting, great fun, and lots of ideas for more shoots. I do look forward to shooting with Tomas, Peter, and My, again. 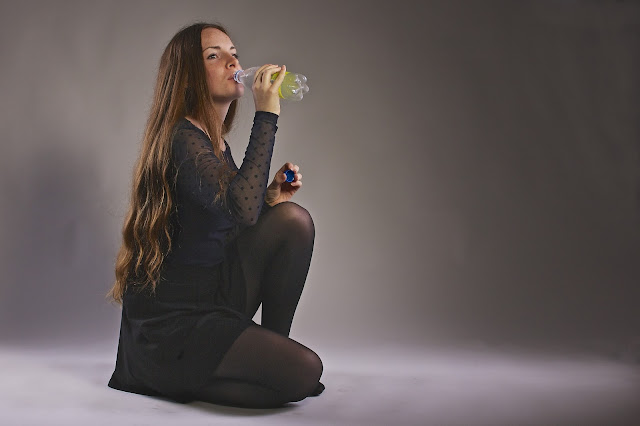 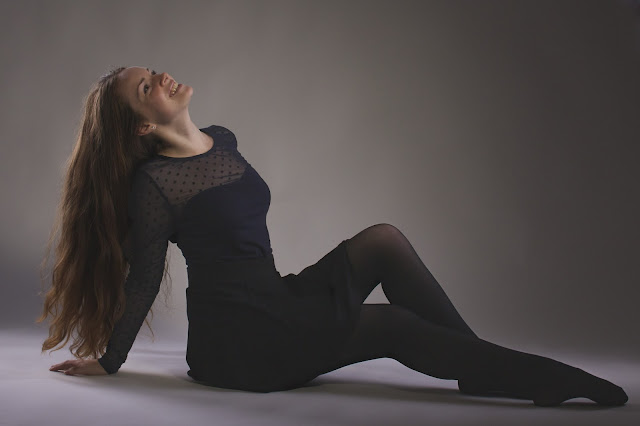 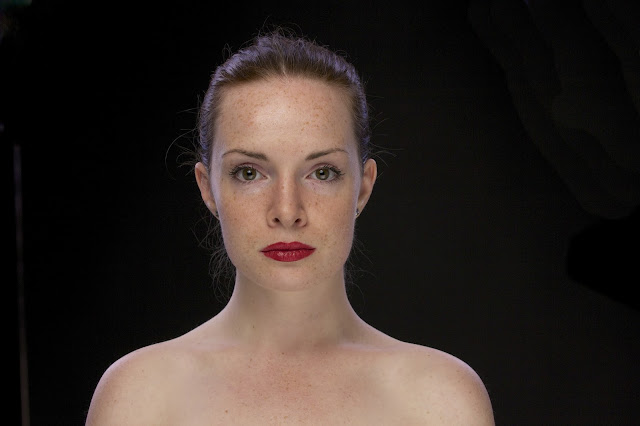 Posted by Kallokain at 03:21 No comments:

 I owe Anna Sigvardsson a lot. She is one of the people who influenced my current career choice very strongly. Anna is a great photographer, and extraordinarily good at making people comfortable in front of the camera.


I met Anna at a mingling event a couple of years ago. As it turned out, we had some shared interests. She was a very good professional photographer, and I wanted to learn. At the time, I just wanted to take better photos. (There is a story there, but I'll save that for another blog post.) Over time we met now and then, had a cup of coffee here, ran into a mingling event there, and we always talked about photography. Always interesting conversation, and always inspiring.


When Anna needed a model to test lighting setups in her studio, I jumped at the opportunity to get in front of her camera. I have modeled for Anna before, and it has always been loads of fun. Working with other photographers, whether you shoot with them, model, direct the shoot, or fetch coffee, also provides great opportunities to learn. I want to do it as often as possible.

For the shoot, Anna used a large silver umbrella at the front, and two large softboxes to the sides. At various points in the shoot, Anna moved the strobes slightly, or changed the power settings. The softboxes did not just light me, they also lit the brown paper behind me.

You may wonder why I wear a hat, sunglasses, and a clown nose. It is because the tiara I tried first did not fit. Just standing there in a black t-shirt would not have been very fun, so we dived into Anna's stash of props to spiff me up a bit.

 I know only two photographers who can shoot me and make me look good. Anna is one of them. On the other hand, Anna looks good no matter what. Her favorite camera is a Canon 5D Mk III, which is what was used for all these shots.

You might wonder if Anna took any photos of me looking more like, well, me. She did. The one above is my favorite.

We had a wonderful afternoon, geeking out with lighting and photography. If you are serious about photography, I strongly recommend practicing and experimenting with friends who share your interests. Great fun, and you will learn a lot.

A couple of days later, Anna and her boyfriend David invited me to a housewarming party in their new apartment. On my way there I saw this elephant… But that is another shoot, and another story.

Posted by Kallokain at 02:31 No comments:

How to get out of a photography slump

If you are a photographer, professional or amateur, sooner or later you will get into a slump. You are not improving, and the fun just isn't there anymore.

Getting out of your slump is easier if you understand a bit about motivation, why you used to have it, and why you don't anymore.

One idea about motivation that I have found useful is Self Determination Theory (SDT). SDT is a theory in the scientific sense, like the theory of gravitation. Gravitation affects you whether you believe in it or not. Pretty much the same thing with SDT.

According to SDT, there are three factors that are important to human intrinsic motivation. If you are in a slump, it may be because something is wrong with one or more of those three factors. Fix what's wrong, and photography may become fun again, and you are out of your slump.

The three factors are: Competence, Autonomy, and Relatedness. Think C-A-R, and it will be easier to remember.


Using SDT as a framework, it is pretty easy to figure out things to do to get out of a slump:


I do hope you find something here to help you bring the light back in your vocation as a photographer. If you do, add a note about it in the comments to this post.

Now, go and have some fun!
Posted by Kallokain at 16:46 No comments:

I promised to publish photo galleries from the Heidi Hay Tattoo Party. This is the first. More will follow.
Posted by Kallokain at 02:26 No comments: 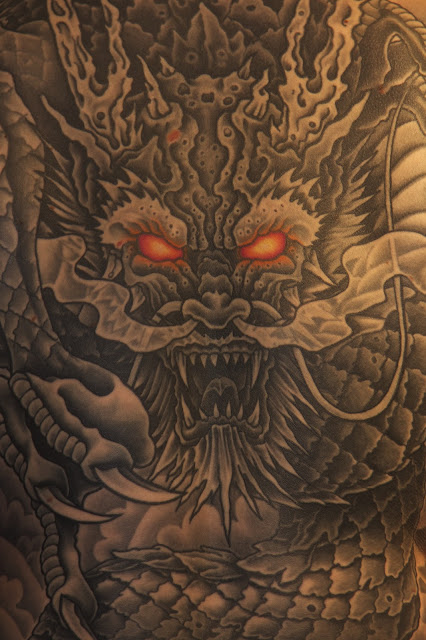 I went to the Heidi Hay Tattoo Party and shot for three days straight. Last year, I went because I wanted to photograph Steam Punk cosplayers.

This year, I went because Hasse Kosonen, one of the organizers, asked me if I wanted to shoot again. If you follow this blog, you may recall that I sometimes shoot Mays Hounds, the band Hasse plays in. I was also the wedding photographer at Hasse's and Tanja's super cool rock wedding recently.

I must admit, I would have gone anyway. Last year was a photographer's dream. I shot hundreds of visually very interesting people, and everyone was happy to have their picture taken. 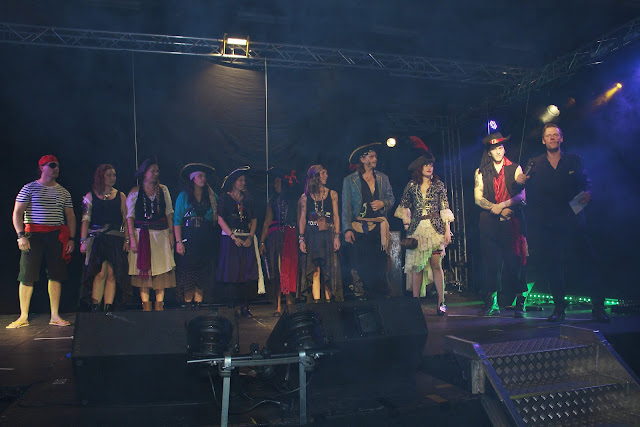 This year the theme was pirates. Tattoos are a great head start when cosplaying pirates, and there were people at the convention that played it to the hilt. 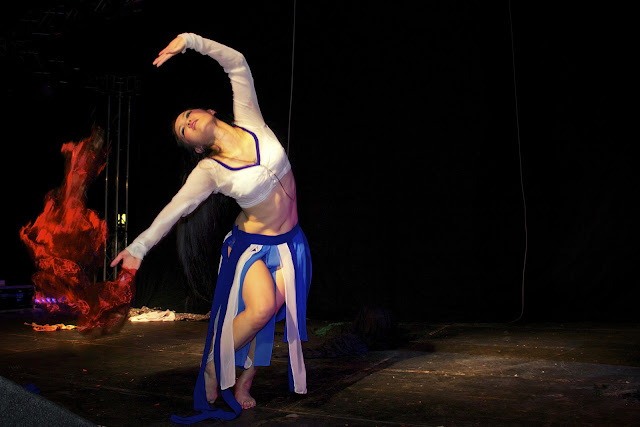 Sana Kazura, my favorite dancer and choreographer, gave three performances. We also had a portrait session, and talked for a bit, about dance, choreography, and life as a traveling performer. I'll make a separate post about our talk. 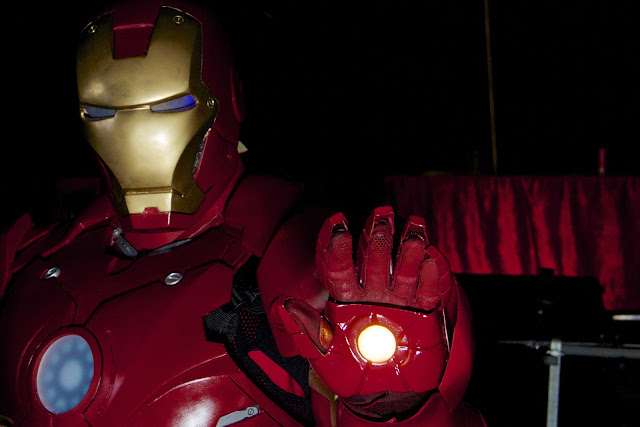 Batman, Spiderman, and Iron Man made appearances. Batman and Spiderman were from Superheroes against Cancer.

Of course, for most visitors, the tattoos were the big draw: There were several tattoo competitions, you could get tattoos from top tattooists, buy equipment, sit down and talk about tattoos...

In upcoming articles, I'll post galleries with photos from the convention.

Follow this link to the first gallery.
Posted by Kallokain at 02:18 No comments: