In a blog post yesterday, I wrote about the importance of improving a picture through iteration. There were some things in the image I created that I wasn't entirely happy with, so I decided to make a new storyboard.

In the first version, the gorilla's arms obscured the legs, which made the animal look a bit strange. It wasn't a major problem, but it did warrant thinking about.

By moving the camera, and the arms, I could fix the problem. When I did that, unfortunately, the camera moved away from the T-Rex. The T-Rex was also outside the viewing angle of the camera.

I moved the T-Rex much closer to the gorilla, but unfortunately that positioned it even further from the camera. The picture still works, but the T-Rex does look smaller, which reduces the impact a bit.

On the other hand, I pushed the white balance even more to yellow, and I made a painted overlay with stronger colors, so the overall light looks a little bit better. I did increase the contrast even more than in the original picture, and made it a little bit brighter.

The ground is greener, and more uneven. I also changed the background, adding a mountain range behind the trees, and a sky with clouds.

I also added depth of field in order to blur both the foreground and background a little bit. In retrospect, adding saliva to the T-Rex mouth was maybe a little bit too much.

I can stop here, and use one or the other, or maybe both, storyboards during the photo session, or, I can make a third version. I haven't quite decided yet.

Be seeing you!
Posted by Kallokain at 08:34 No comments:

King Kong VIII: Protector, or How to Create a Dirty Picture

As you know, I draw inspiration from many different sources when I plan and create pictures. The picture above is a good example:

The basic idea and composition is from the 2005 version of King Kong. As discussed in earlier King Kong/Skull Island posts, I am taking a look at what the island might have been before Kong, during the 3,000 years humans and gorillas have lived on the island.

I do have a tendency to trip over my own love of the movies though, and recreate scenes from them, rather than using them to jump start my imagination.

Why an albino gorilla? Well, it could have been because I watched Rampage a little over a week ago, but it wasn't. The real reason was contrast. In the King Kong movie, Ann Darrow is blond, and wears clothes that are mostly bright in color. That means she shows up in bright contrast to Kong, when she stands in front of him.

My protagonist in the storyboard is much darker, and would be almost invisible against a dark background. Something had to change, and I chose to change the color of the gorilla.

Another difference is that the character in my picture is armed, and prepared to fight back. This suggests a slightly different relationship with the gorilla than the one Anne Darrow had with Kong. More of a cooperative partnership, where they help each other survive.

There is one important thing i got from Rampage: Dirt! If you look closely at a picture of George, the giant albino gorilla in Rampage, the fur is matted an full of dirt, little twigs, and generally icky stuff that can get caught in long gorilla fur.

The gorilla model I used is excellent, but it is also squeaky clean, so I dirtied it up quite a bit. for the gorilla, I created a layer for the dirt, and then used a couple of different texture brushes to paint the dirt in. I changed the blend mode to Soft Light and reduced the opacity to 50%, to make the dirt blend in with the fur. I then created a second dirt layer and repeated the process.

Speaking of dirt, 3D images tend to have a look that is way to clean to look realistic. I tried to fix the overall look by taking the picture rendered in Daz Studio, repaint it in Dynamic Auto-Painter PRO 6, and then use the painted version as a Soft Light overlay. This dirtied up the trees and the ground a little bit, while also adding a smudge of dirt here and there to all three characters in the picture.

I used only a few trees for the background, but I created many instances, to make them look like a whole forest. You can create instances manually in Daz Studio, but I had great help from Scatter Pro. Scatter Pro made it easy to create lots of trees, distribute them over and area, with random variation in placement, size, and rotation.

I did the same thing with the larger tufts of grass, but the ground still looked too flat and sterile. To combat that, I added a grass mesh. When that still did not help, I painted in some extra grass in post.

Frankly, the ground still looks to flat and sterile. I am considering reworking it in two ways:

The first is to simply use a photo of a meadow. That would give me the most realistic results, but it will be a challenge to mask the gras, so I can put objects behind it.

The second solution is to experiment with the new hair system in Daz Studio 4.11, to see if I can use that to create reasonably realistic grass.

There is a third option: Blender 2.80. However, Blender will probably take me about a year to learn, and only if I put in a lot of effort, so if I go that route, there won't be any quick results.

For the purpose of comparison, here is the original render, straight out of Daz Studio. 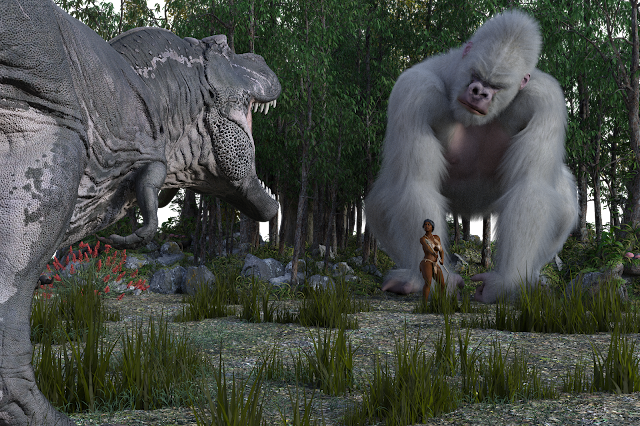 The Daz render had a transparent background. I used an old photo of a forest to provide background for the image. Note how much cleaner this picture looks than the finished version. Way too clean.

In addition to the changes already mentioned, I increased the contrast, reduced the saturation, and changed the color temperature to make the light a bit more like evening sunlight.

I also cropped the picture from a 2:3 to a 1:1.85 aspect ratio, partly to get rid of unnecessary foreground, and partly to give the picture more of a movie look.


Getting It Right the Last Time

I almost never create a great picture on my first try, and if I do, it has as much to do with luck as with skill.

It is very difficult to correct your mistakes unless you see them, and you won't see them until you have created a picture. Thus, the first version of a picture is usually not very good in and of itself, but it is an excellent aid to creating a better picture.

Painters often recreate the same basic picture over and over again, continuously changing and improving it as they go. Sometimes there are big changes, sometimes just minor tweaks, but the willingness to iterate is the key to improving.

I am, I must confess, a bit lax in this regard. I tend to get new ideas faster than I can create storyboards for them, and much faster than I can organize photo sessions. The result is a certain sloppiness, that ultimately can hold me back from developing as a photographer and as an artist. I tend to be too happy when I express an idea, to worry about details.

This is a weakness, and this time, I'll try to fix it. I'll make a new version of this picture correcting the things I am not happy with, just like a painter would do. There are plenty of things that can be improved, but there is one thing in particular that I find annoying about this version?

Can you guess what it is? If so, comment!

The first version may not be perfect, but I am determined to get it right the last time.

Just a couple of minutes ago, as I was sitting (in a café, as usual), working on the next picture in this series, two kids, about 6-7 years old, asked me what I was doing. I told them I was working on a picture with a giant spider in it. The new picture does not look like much yet, so I showed them this one. They liked it. Then, an older woman, probably their grandmother, called them away. She showed no interest in what had her grandchildren so intrigued. That, and a conversation I had yesterday, with two friends, made me reflect on the nature of imagination and curiosity.

Why is it that so many adults seem to have lost their imagination? Is it a biological phenomenon? Is it the environment? A bit of both?

I can tell you what I do to keep my creativity alive:

I feed the creative engine by reading, by watching movies, listening to music, looking at art made by others. I actively seek out new experiences when I can.

I process the creative raw material by thinking about it, by talking about it with my friends, and by writing this blog.

I express it by writing, photography, and by dabbling with other media, like the 3D image above.

I was over forty when I started with photography. Today, I'm 56, going on 57. In many ways I feel younger than I did when I was 30.

Maybe I ought to just be happy that my crumbling brain has retained a few, occasionally firing, creative neurons. I can't help but be a bit bothered though, when I see so many people younger than me, who seem to have lost their curiosity and imagination.

Over the years, I have tried to help others fan their creativity, hoping that they, in turn, will do the same for me. I have gotten a few very good friends that way, and they mean a lot to me, so in that sense it has worked.

My failures greatly outnumber the successes though. Granted, I do not know everything that goes on in the lives of the people I encounter, but I do get the feeling that in many cases, there is not a lot going on.

Then again, perhaps I am just projecting my own emotions on other people, when I imagine that there is an ember of creativity in there, just waiting to get fanned into life, to become a self-sustaining fire.

Perhaps most adults are happy just the way they are, living a life where each day is like any other day, and the highest ambition is to spend a day on the beach, doing nothing. (I shudder as I write it. To me, a day on the beach doing nothing is sheer hell, an unendurable punishment, and something I flatly refuse to subject myself to.)

Better then, if I want company, to look to the creative fires already burning out there, than to try to build fires by fanning ashes. By the way, alone or not, I need to do something about the lack of contrast in my pictures. Sigh! They still look a lot better in my head than they do when they are finished. I got some frank and forthright advice yesterday, when I met my friends. I am going to do my best to follow it.
Posted by Kallokain at 05:37 No comments: