I thought I should try something new, like a 360 panorama digital painting.

The painting turned out pretty good for a first try. The main problem is displaying it.

Facebook has 360 panorama support built in. No problem there.

Here, I am trying out a panorama viewer from orb.photo.
Posted by Kallokain at 08:45 No comments:

Lost World IV: Aftermath (a.k.a. Blood on Her Hands) 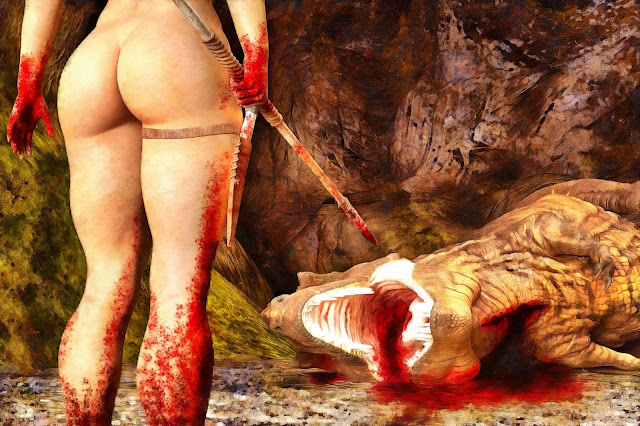 This is the fourth and final (unless I get more ideas) picture of Kyla.

Yes, I named the character. I thought it appropriate, since she appears in an entire series of pictures, and may appear again.

As you can see, it is immediately after the battle against the T-Rex.

I have written about my sources of ideas for this series in my earlier posts. What I wrote then, goes for this picture too. However, there is one influence worth a particular mention:

Joe Jusko! (Check out his pictures on DeviantArt. It is a treat.)

I have learned a lot just by looking at Joe Jusko's pictures. They are strong, dynamic, the colors are vibrant, the compositions lead the eye to a point-of-interest, but it is more than that. Jusko has something special, Jusko has angles.

No, not angels! Angles! In some of his pictures, he is careful not to overdo it, he uses unusual angles to create drama, and heighten emotion.

I'll link to a couple of his images on DeviantArt. Check them out and you'll see what I mean:

Here are two more. They do not use viewing angle in the same way. I am including them because I like them, and because they have female protagonists that don't take crap from anyone:
It is very important to know...oh, screw that! I got a new idea for a picture with Kyla. Got to go.

How I made the T-Rex battle 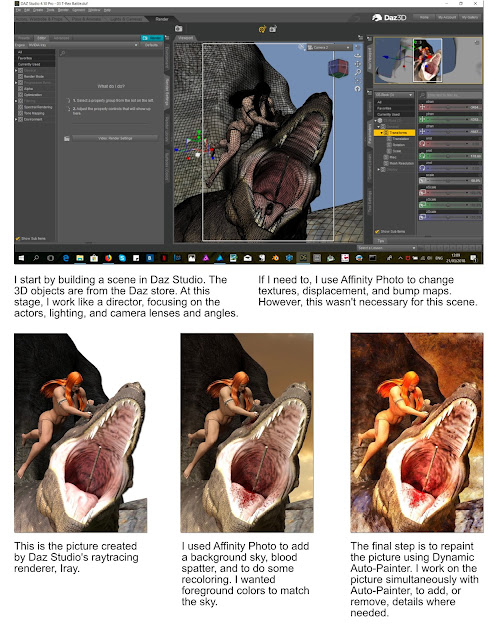 My current process for working with 3D images, in a single graphic.
Posted by Kallokain at 06:02 No comments: 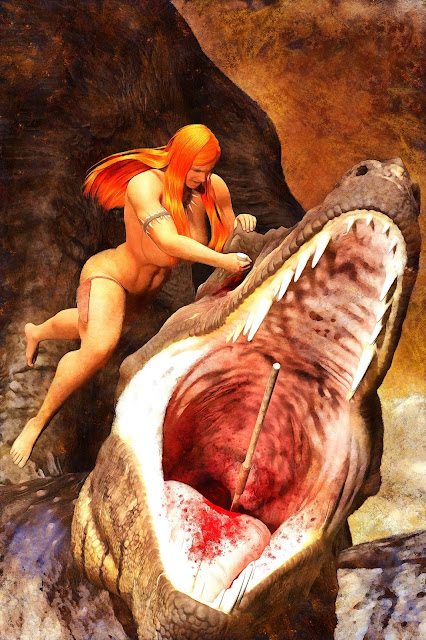 For the third picture in the series, I wanted to do something a bit more dynamic. This is an area where I have a lot to learn, but I am working on it.

I am still not convinced that what I am doing is art. All I am doing is that I am putting pieces together, pieces created by other people. On the other hand, as a photographer, I am doing exactly the same thing, and that is considered art.

When in doubt, check definitions. It does not always help, but then again, quite often it does:

The expression or application of human creative skill and imagination, typically in a visual form such as painting or sculpture, producing works to be appreciated primarily for their beauty or emotional power. - The Oxford dictionary

Well, at least I am trying. I am recombining all sorts of different stuff, drawing on ideas from paintings, comics, movies, and books from several different genres. On top of that, I kit bash like crazy, using commercial 3D models, my own photos, and a suite of different software apps, to create these images. The purpose is to create works of beauty and emotional power, though, I admit, not always at the same time.

It doesn't have to be good to be art. It is making the effort that counts.

Here is the most important bit: If I can do it, so can you!

When I was seven years old, I loved to draw, like almost all children at that age. Then, something happened. When I was thirteen, I was utterly convinced I could not draw, and worse, I could not learn.

Through most of my life, I did not draw anything. Then, I started using simple diagrams, drawn on paper with squares, because I knew I could not draw a straight line, to make notes at work. I discovered I could use simple sketches to explain things.

That was a breakthrough for me. My sketches and diagrams looked awful, but that was okay, because they communicated what I needed to communicate. Mostly software design, at the time.

Later, I got into Systems Thinking, and management, and it became even more important to be able to express myself visually. I did a lot of presentations, paid presentations, so I needed visual aids, both to explain difficult concepts, and to keep the audience awake.

Despite this, the one thing almost all of my pictures had in common, was that they sucked. There were a couple of exceptions though, and I think that is what kept me going.

The third year, my skills took off. I learned to take fewer, but much better, photos. I began doing digital effects, and various kinds of trick photography. At first, I was back to sucking again, but I kept at it, and began to improve.

Now, I am still struggling. I am at a different level, but I am struggling more than ever. I used to think that only the results mattered. How I got there was unimportant. I still believe that, as a general principle, but I am starting to have doubts when it comes to my personal work.

I am not to worried though. That nagging doubt is part of the drive to explore, to learn, and to improve.

Posted by Kallokain at 13:59 No comments:

As I mentioned in my previous post, I went for extreme, Boris Vallejo and Julie Bell style body proportions. I think I overdid it a little, and ended up with a She-Hulk version of Cavewoman.

So, I can go back to the drawing board, so to speak, or I can go with it, and see whether I can come up with ideas for a series of pictures about her.

I guess it's back to the drawing board either way.
Posted by Kallokain at 14:17 No comments: 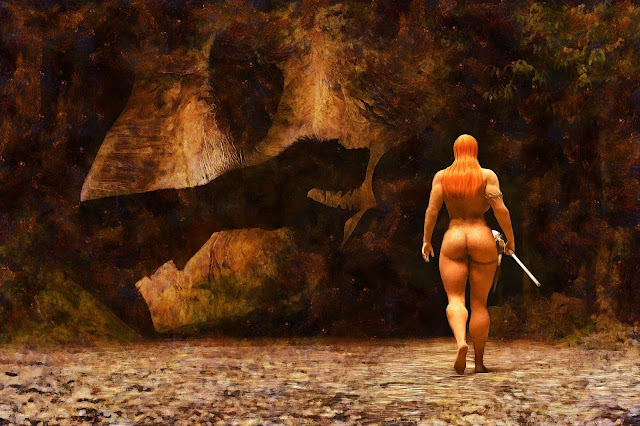 I have had the idea for this one in my head a couple of days. The idea is that sometimes, you have to knowingly walk into danger, and take on something that may be too big for you to handle.

This is one picture that I'd like to make a photographic version of. We'll see how that works out.

Where do you get inspiration for a picture like this? Well, I got it from several different sources. The Lost World theme is from books like Arthur Conan Doyle's book The Lost World, and Michael Crichton's Jurassic Park. Edgar R. Burrough's Tarzan and John Carter books are also strong influences.

In case you are wondering about the nudity: It's the norm on Barsoom, where John Carter had his adventures. Also, I budget my 3D projects carefully, and appropriate clothes weren't in the 3D budget for this month, and because I am still trying to figure out how to do nude art.

There are of course artists that have inspired too. The somewhat exaggerated proportions of the woman is inspired by the art of Boris Vallejo, Julie Bell, and Frank Frazetta. The situation, with impending danger, owes more to Joe Jusko, and perhaps FrankCho. (Frank Cho would probably have turned the idea into slapstick comedy.)

Technically, I am a photographer, not a painter, so I take a photographer's approach to creating pictures. That is, I do not create stuff. I take existing stuff, and arrange it on a scene in front of a camera, and take a picture. It just so happens, this time I used 3D objects. and the scene was created in Daz Studio.

I do have a couple of more ideas on the same theme, so this may well turn into a short series of pictures.
Posted by Kallokain at 08:41 No comments: