Over the past two years, I have said now and then, that I want to do more Science-Fiction genre pictures. Each time, I have continued doing more Fantasy, and sometimes Horror, pictures.

This time, I just might be able to switch gears a bit.

As you can see, I went from that idea to nude woman on beach instead.

The version above is the second version of the picture. The first version looked like this:

There were three things that bugged me about the first version:
I wanted it to look like the woman had just managed to get ashore with some supplies and equipment.

I drew part of the inspiration for the picture from the Sword & Planet sub-genre of Science-Fiction, in particular from Jack Vance's Tschai books. While working on the pictures, I decided to re-read them, so I bought the Kindle edition from Amazon. My original paperbacks are long lost.

I also decided to make a 360 panorama version. Sadly, Blogger can't show panoramas, and embedding third party panorama viewers have proven quite unreliable in the past. I uploaded the panorama version to ArtStation instead.

If you click the link and have a look around, don't forget to look up.

Is this the beginning of a new series? Maybe. I do have a couple of ideas.

Posted by Kallokain at 10:49 No comments: 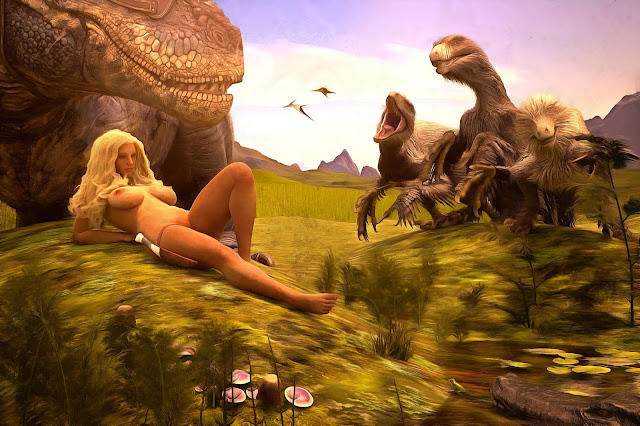