Desert Trek II: How to publish 360 panorama pictures. The Good, the Bad, and the Just Sad

Note: Google has screwed up its support for third party 360 panorama viewers. Thus, you may not be able to see the panorama  at the beginning of this article. I am working on a fix. It may take some time.

Panorama 360 pictures are easier to create than you might think. If you are into photography, you can do it by taking several pictures and stitching them together in a program like Affinity Photo or Photoshop. You can also use dedicated panorama software like Hugin.

If you want to make it really easy, and have the money to spend, you can buy a 360 panorama camera.

If you are into 3D, programs like Daz Studio, Blender, and many other 3D programs have the capability to render 360 panoramas. That's the easy part, but...once you have a360 panorama, where and how do you publish it?


Facebook has had 360 panorama support for some time now. It works well, but uploading a panorama picture is a kludgy, slightly painful process.

Facebook uses metadata in pictures you upload to decide whether they are panorama pictures. This, of course, hinges on the pictures actually having the correct metadata from the start.

However, you can add that metadata to the picture yourself. The following description is for Windows 10: 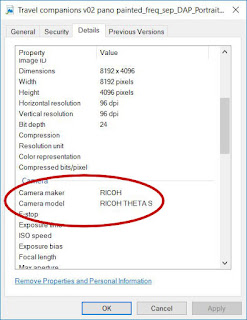 Facebook will believe the picture is a 360 panorama shot with a Rico Theta S camera, and will handle it as the 360 panorama it actually is.

Google: How to get it, but get it wrong

The blog site I use to publish my blog, Blogger, is a Google owned sight. You may have noticed that I am using the Orb Panorama Embedder to display the panorama painting at the beginning of this article. That is because Google truly sucks at handling panoramas.

You would expect that Google, with its support for 360 panoramas in Google maps, would have an excellent way of embedding panoramas on its blog site, and have panorama support in Google Photo, and its other products, but no.

Google does offer 360 panorama support for web developers, but not for ordinary users.

The problem, I believe, is that Google has been so focused on using 360 panoramas in Google Maps, that they forgot all the other ways 360 panoramas can be used.

One site that gets how 360 panoramas should work, is ArtStation. When I upload a panorama to ArtStation, I just tell ArtStation that it is a panorama that I am uploading.

Then, everything works. No hazzle. No metadata to set manually.

Funny how ArtStation has managed to implement 360 panoramas in a much simpler way than Facebook and Google.

There is a workaround: You can publish panorama photos by slicing them up into square pieces, and publish them using Instagram's multi-picture upload feature.

Unfortunately, this works only on cylindrical panoramas. 360 panoramas are spherical. Think of the camera as placed in the center of a sphere. In order to project the spherical image to the flat surface of a picture in your camera or computer, a mathematical model called equirectangular projection is used.

I havent yet seen a piece of software that handles equirectangular projection when slicing a true 360 panorama.

There is another possibility: Convert the 360 panorama to a video, and upload that. You can probably do it with Pano2VR, but I haven't tried that yet.

For the time being, Instagram just isn't a good platform for publishing 360 panoramas.
Posted by Kallokain at 04:23 No comments:

The Rescue - and a few words about cropping pictures 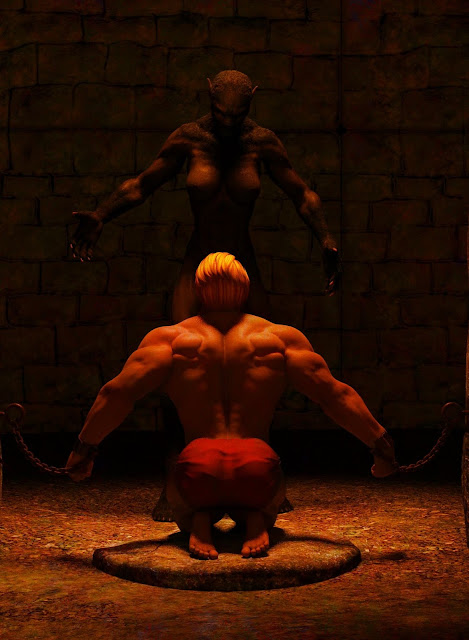 What do you see in the picture above? I see a big, muscle bound dude in chains, about to get ripped to pieces by female werewolf.

We can deduce from the hair color that the big dude isn't Conan. Could possibly be Doc Savage, but the hair is too long.

Not a major hero, which means he can be sacrificed on the altar of dramatic storytelling.

Looks like he is a goner. Farewell, unknown muscle bound guy!

Except...that I cropped the picture.

Let's look at a version that reveals a bit more. 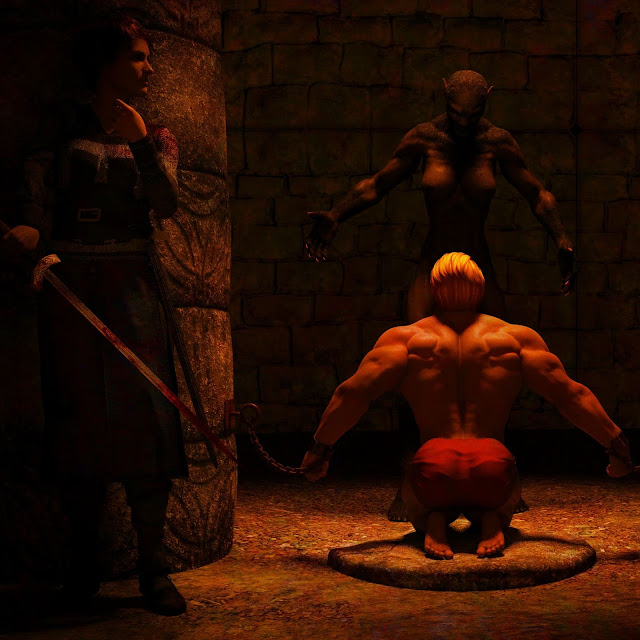 Okay...this is different. Woman with bloody sword lurking in the shadows. The bloody sword indicates that she is a fighter, and a competent one. At least more competent than the person whose blood is on the sword.

If she intervenes, muscle guy has a fighting chance, even if it's not his fight. A bit of a nail-biter for him, except he can't bite his nails because...chained to two pillars.

If you have followed this blog, you may recognize the woman: Alice of Sandby. Well, one of the versions of Alice that I have used in other pictures. You may also notice that something is written along the side of the blade. So, the sword is Illi, Alice's not-so-nice-but-oh-so-lethal rune blade.

Suddenly, it looks like it is the werewolf that is in serious trouble.

So, the story changed completely because of how the picture was cropped. Cropping is about the simplest thing you can do with a picture, and yet, it is also one of the most powerful things you can do.

Try it! Whether you are a painter, a photographer, a 3D artist, or something else, have a look at your pictures, and see if you can change the stories they tell by cropping them.

Facebook blocked my previous blog post, The Importance of Reading. Check it out if you wonder why artists can benefit by reading.

Posted by Kallokain at 06:57 No comments: