LESS! – From a book design perspective 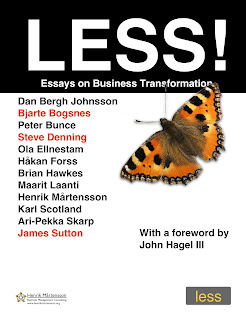 LESS!, one of the most fun book projects I have ever worked on, is now available on Swedish online book stores, Bokus, Dito, Bokon and Adlibris. The book is also available on Amazon, and in hardcover on Lulu.

I have blogged about the contents of LESS! in my management blog. Here, I'll write a little bit about the design, starting with the cover.

All management books I have published, well, only two so far, use the same basic design with a black field on a white background. I always put something on the cover that has an element of orange.

It is important to me that the cover has some link to the contents, and since this is a book about business transformation, what better symbol than a butterfly?

Also, one of the authors (you'll have to read the book to fin out who,) used the lifecycle of a butterfly as a metaphor for business transformation in the book, so putting a butterfly on the cover felt like the right thing to do. 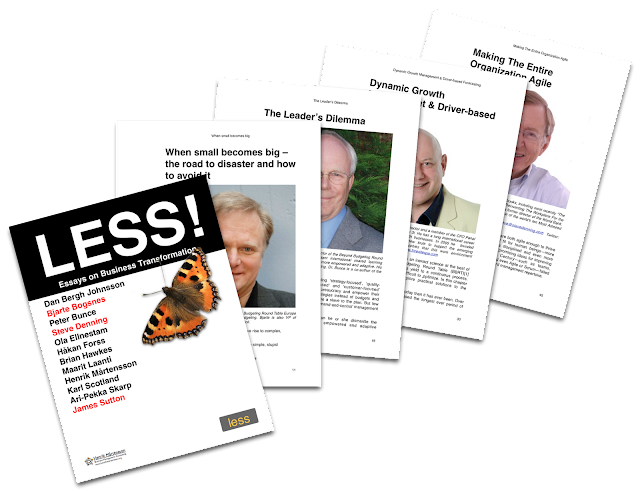 One thing I was very careful with regarding the interior design, was to start each essay with a large photo of the author. I wanted readers to meet the authors face-to-face, or as close as we could get.

I felt that that would make it easier for readers to trust the authors, and building trust was necessary, because a lot of the things in the book, about budgetless financial systems, short strategy loops, queueing theory, and so on, are controversial.

That is also why each chapter starts with a brief biography, helping to establish the credentials of the author.


Diagrams were another important feature. We had lots of diagrams! When you set out to explain a lot of complicated stuff, you need to simplify. We used diagrams to do that, and also took care to keep the language simple. I ran all texts through readability index calculators to help ensure that the language itself did not obfuscate the ideas and logical arguments.

LESS! is a thought provoking book, and I do hope it can help kick off real improvements in leadership and management practices, and in how we organize and collaborate at work.

Posted by Kallokain at 12:03 No comments:

Published on 1x: Taking a Break


My photo Taking a Break has just been published in the curated gallery on 1x.com. Quite an honor. :-)
Posted by Kallokain at 08:50 No comments:

I admit it, I am a sucker for adventure stories! I like Science-Fiction, Horror, detective stories, and superhero comics, and movies, and it shows in the things I shoot.

The past few years, my friends and I have done our best to turn Gothenburg into a city of adventure, horror, and wonder. Here are some of the highlights. 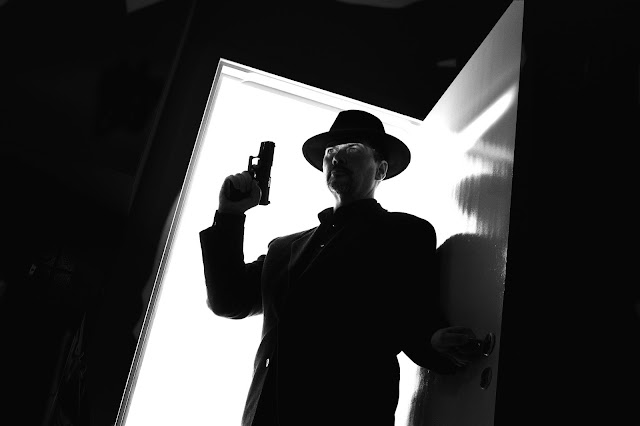 This shot of a hard-boiled detective on his last case was inspired by Sin City and other Film Noir movies.

It is a selfie. I taped a sheet in the door frame to my kitchen, and lit it from behind with a flash on a tripod.

The sliver of light on my eyes is from a flash with a pizza box as a light shaper. I often improvise, and use whatever is handy to shape light.

I run a photography network for both amateurs and professionals. We have photography events, with various themes. Recently, we had an Adventure photography event, and it was there that I met Peter Markusson. Personally, I think Peter is a lot better as a hard boiled character than I am.

A couple of my friends and I run a Swedish photography videocast, Fotosnack (photo chat). We discussed producing an episode about doing interesting stuff with simple gear, like an iPad or camera phone.

I did a mini-project, where I used my iPad, and apps like LensFX and Snapseed, to produce a series of pictures from the little known Martian invasion in the 1970´s. I released the photos one-by-one.

As I released each photo, I also wrote a little story snippet about the invasion. 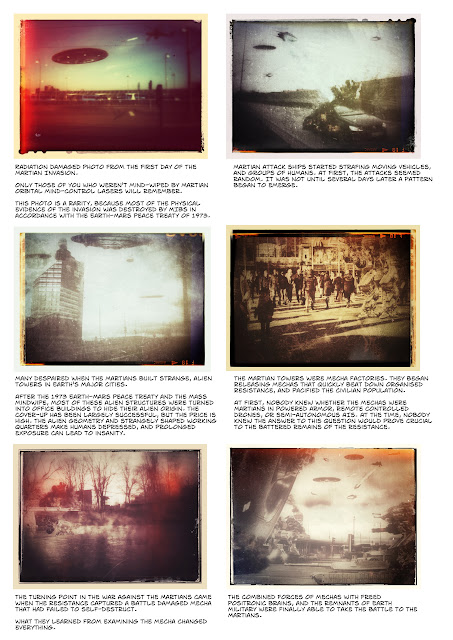 When I published the pictures and story snippets, I did not state that they were fiction. I should have, because some people thought the invasion story might be real.

That is why I started including mecha robots in the pictures. It avoided further confusion. Fortunately, nobody believed in Martian Mecha.


If you have read horror stories by H.P. Lovecraft, you will probably see that this is a human/Deep One hybrid.

This is a subject I plan to return to...when the stars are right.

The Girl Who Wanted Eyes for Christmas is a more subdued horror piece. Perhaps it is best not to think of what she'll do with the eyes, or how she'll get them. Let's hope they are not yours.

What would it be like if some people really had superpowers? When tempers flare, quite messy, I am afraid.

That was the premise of Savage Heroes, a series of pictures where superpowered characters really let loose, and the carnage that follows.

Savage Heroes: Warzone! is a superhero team slugfest picture. It is not realistic, and it is not meant to be. Instead, I went for a four color comic book look common in the 80´s. 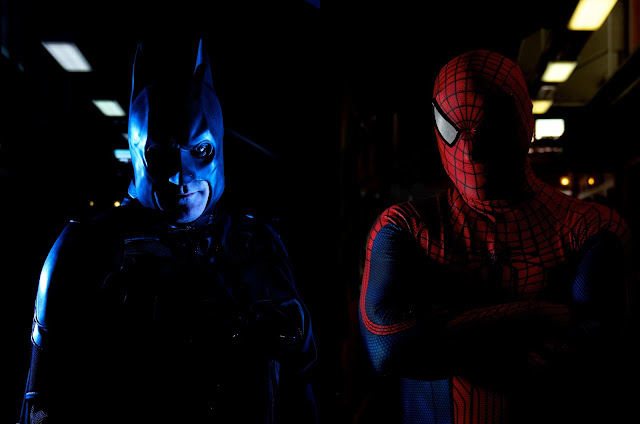 The Batman and Spiderman shot was a bit of pro bono work for Superheroes Against Cancer.


A Rift in Time is a photo comic book project. We were a team of eight people who spent over a year creating a time travel comic book adventure, complete with dinosaurs.

I wrote the story, and directed the photography, but we were several photographers, and most of us also played roles in front of the camera.

Turning Gothenburg into a prehistoric, 65 million year old landscape, on zero budget, was a bit of a challenge, but it worked out alright.

A Rift in Time is an adult adventure, and there is a bit of graphic violence in the comic. The drawn look allowed us to tone the effect down a bit, and reduce the realism where we needed to. 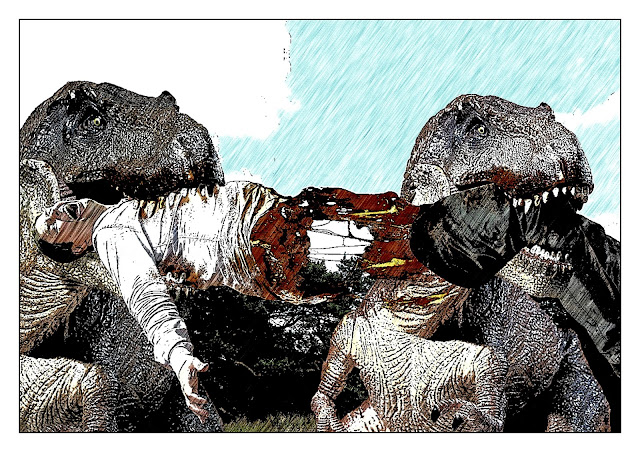 I am rather happy we went for the drawn comic look. The original picture is even more gruesome.

Another benefit of the look was that we could speed up the composite work in postproduction, because we did not need to match light and shadow as carefully as we would otherwise have had to do.

Though we picked a comic-look for A Rift in Time, I have also had a lot of fun doing more realistic looking work.

For the picture above, I used my son's plastic toy T-Rex. I added organic looking skin texture from the same fish photos I used to create the human/Deep One hybrid horror photo.


Gothenburg may seem a bit sleepy at times, but between the detectives, monsters, superheroes, and time travel accidents, the city is much more exciting than it looks.
Posted by Kallokain at 12:53 No comments:

Savage Heroes: Warzone! – How to Create a Superhero Picture

Recently, I did something I have wanted to do for a very long time: I created a full-scale superhero team slugfest picture!

The idea was to create a picture that could work as the centerfold in a Marvel or DC Comics superhero comic book adventure from the 80´s or 90´s: A messy, complicated fight, strong colors, and  heroes and villains that really let loose with their powers.

I wasn't alone. We were 12 people who worked together to create the picture. Here, in comic book format of course, is how we did it. 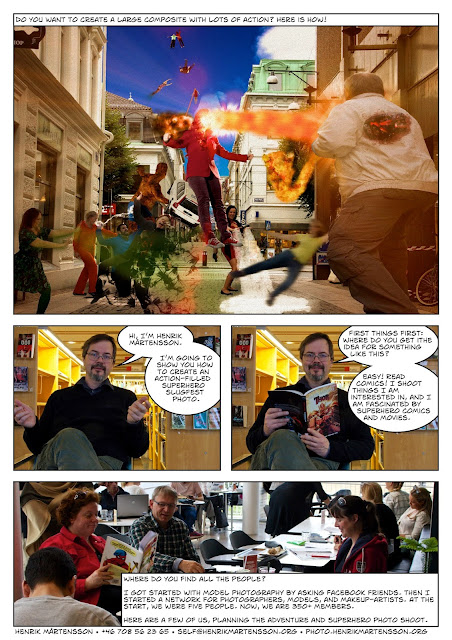 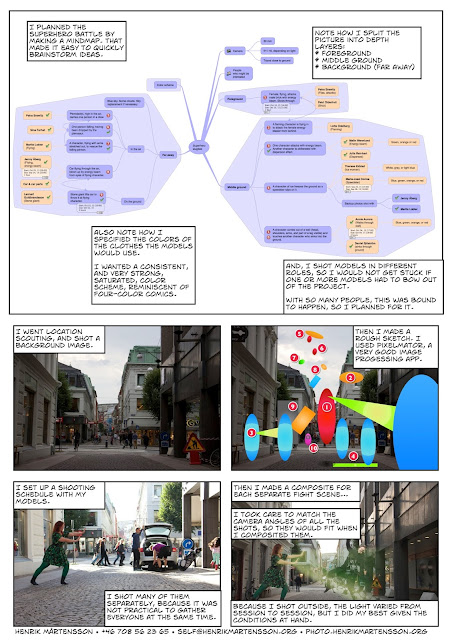 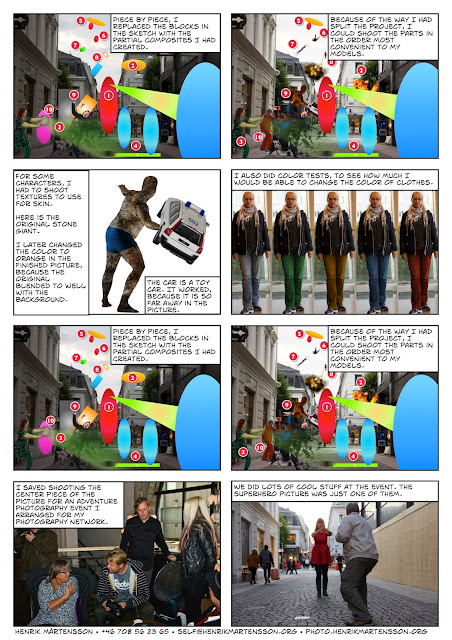 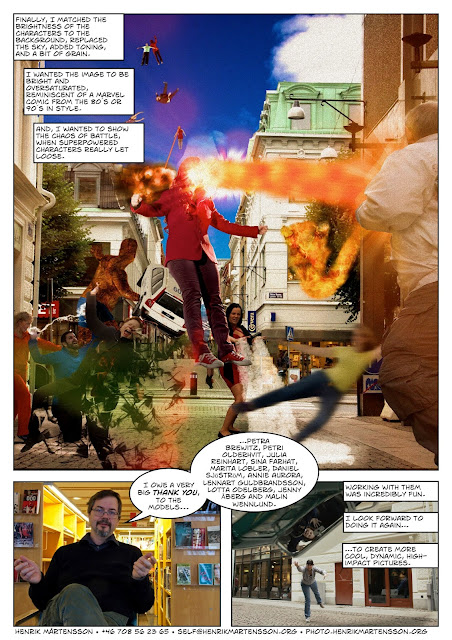 Posted by Kallokain at 02:50 No comments: