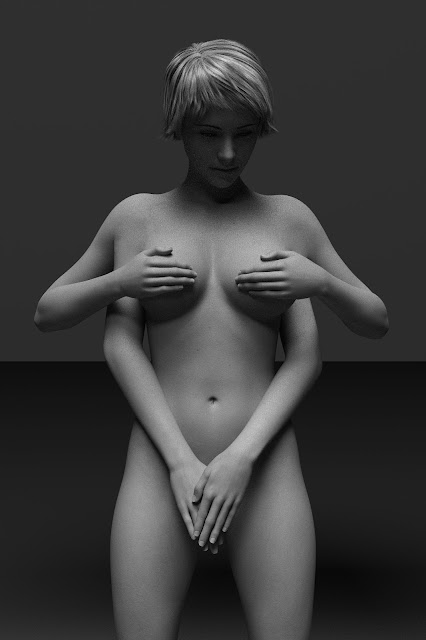 It is amazing how we limit our own growth and success by self-imposed constraints:
There are ways around it though:
All the small steps you take will add up. Look back after a year, or two years, and you will see that all the small steps add up to giant strides.

I've had the idea for this picture for a long time. Making it was technically easy.

I built the scene in DAZ 3D Studio.

I bent the neck and tilted the head of the original model. When I did that, the models did not quite match up. Instead of matching the necks and heads precisely, I simply turned the head of the second model invisible.

I created a virtual studio consisting of two planes, a floor, and a back wall. Then I created a rather large third plane, made it a light emitter, and placed it high above, in front of the model, and angled at 45 degrees. This provided ambient lighting for the scene.

Finally, I added a spotlight to put a bit of extra light on the model. I made the spotlight a 2x2 metre square, to soften the shadows.

I rendered the scene with Daz built-in Iray renderer.

I did some post work in Affinity Photo, mostly to hide the intersections between the two 3D models at the shoulders. I used a combination of inpainting and patching.

I increased the contrast a little bit, and turned the picture black and white.

Monolith I and II

The Monolith series is very loosely inspired by the monolith in 2001: A Space Odyssey.

If you have seen my other Fine Art Nude work, you know that they are often rooted in some aspect of the human condition. The monolith series is more about form, that is, shape, and light.

I put Monolith II at the top of this blog post, mostly because it is social media safe. (Yes, I occasionally chicken out. Depends more on my current mood, than the pictures.) Reduces the risk of getting banned on Facebook.

Monolith I is more about the light than anything else. I wanted to see what happened when I put a very large light source directly behind the model. If that had been the only light source, you would see little more than a silhouette.

I added another light source in front of the model, angled 45 degrees, and high enoug to illuminate the entire monolith. Because of the distance between the light and the model, the model is evenly lit from head to toe.

I did add a bit of shadow in the genital area for modesty's sake. Not the model's modesty (she is a 3D model), or yours, but mine. I am still a bit shy about doing nude art.

Here are links to some of my earlier Fine Art Nude pictures:

Posted by Kallokain at 02:57 No comments: