Fighter planes at the Gothenburg Aeroseum

I was at the Gothenburg Aeroseum, an aircraft museum in an underground, former military aircraft hangar. While there, I took some shots, of course.

I used a super wide angle lens, a Sigma 10-20mm, for these photos. I wanted to convey a sense of speed by distorting the perspective.

For the shot above, I hoisted my camera up high by using a monopod.

Here are some more shots from the visit. 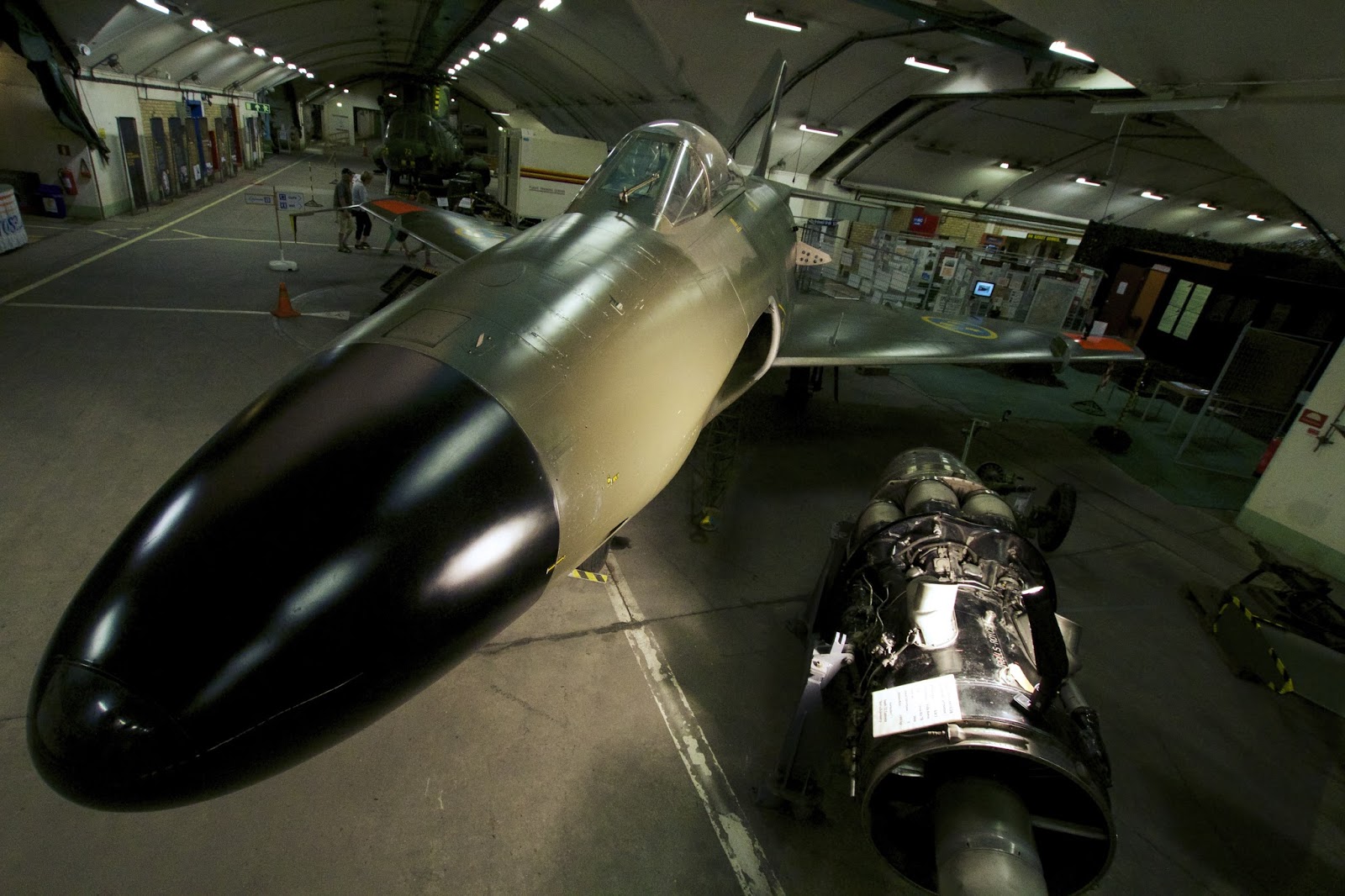 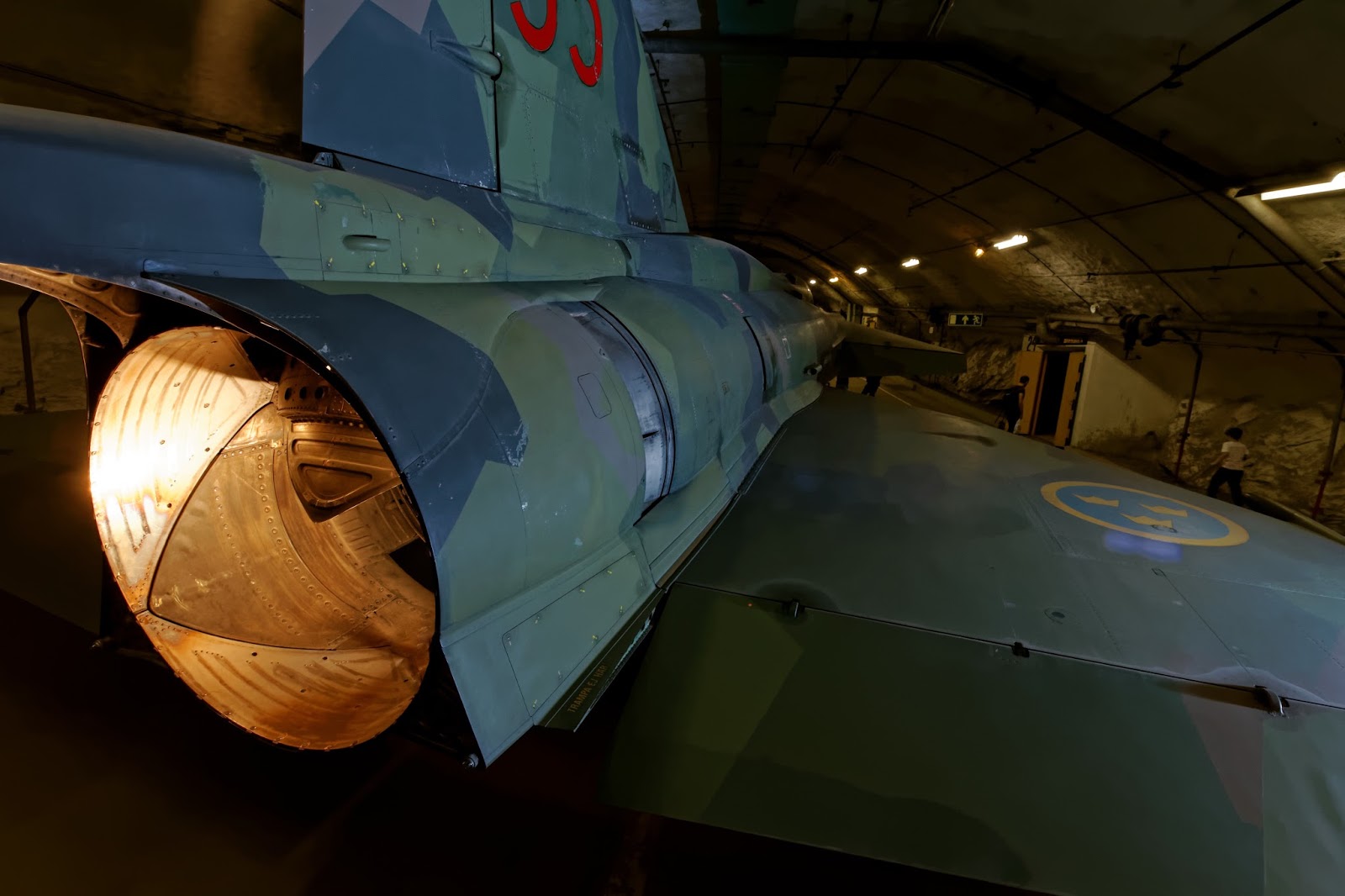 For this shot, I put a flash with a full CTO gel in the afterburner, and another with a 1/2 CTB gel on the right wing. This enabled me to give the impression that the engine is firing up.

I could not resist adding a bit of glow to the light from the afterburner in Pixelmator. 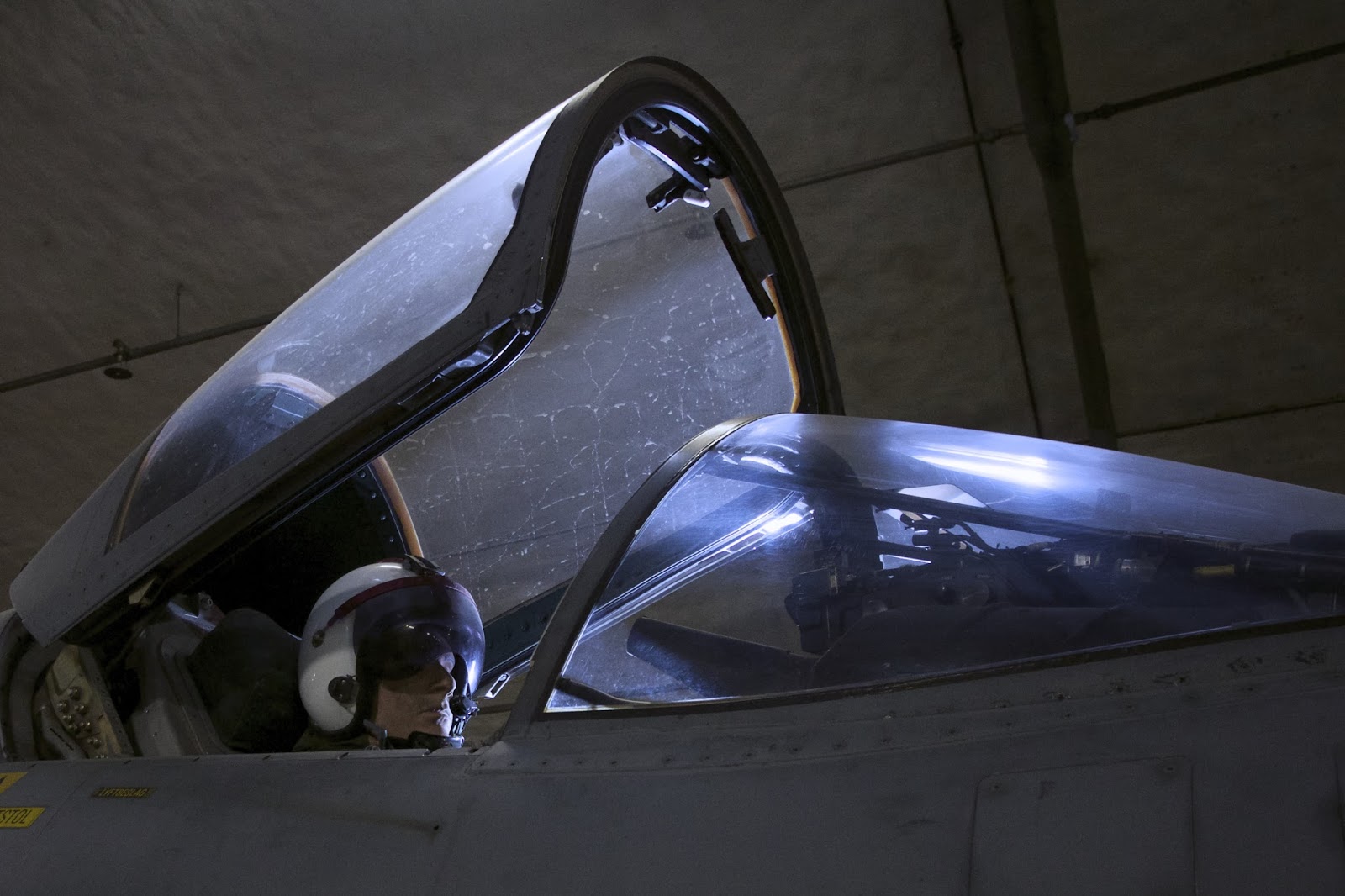 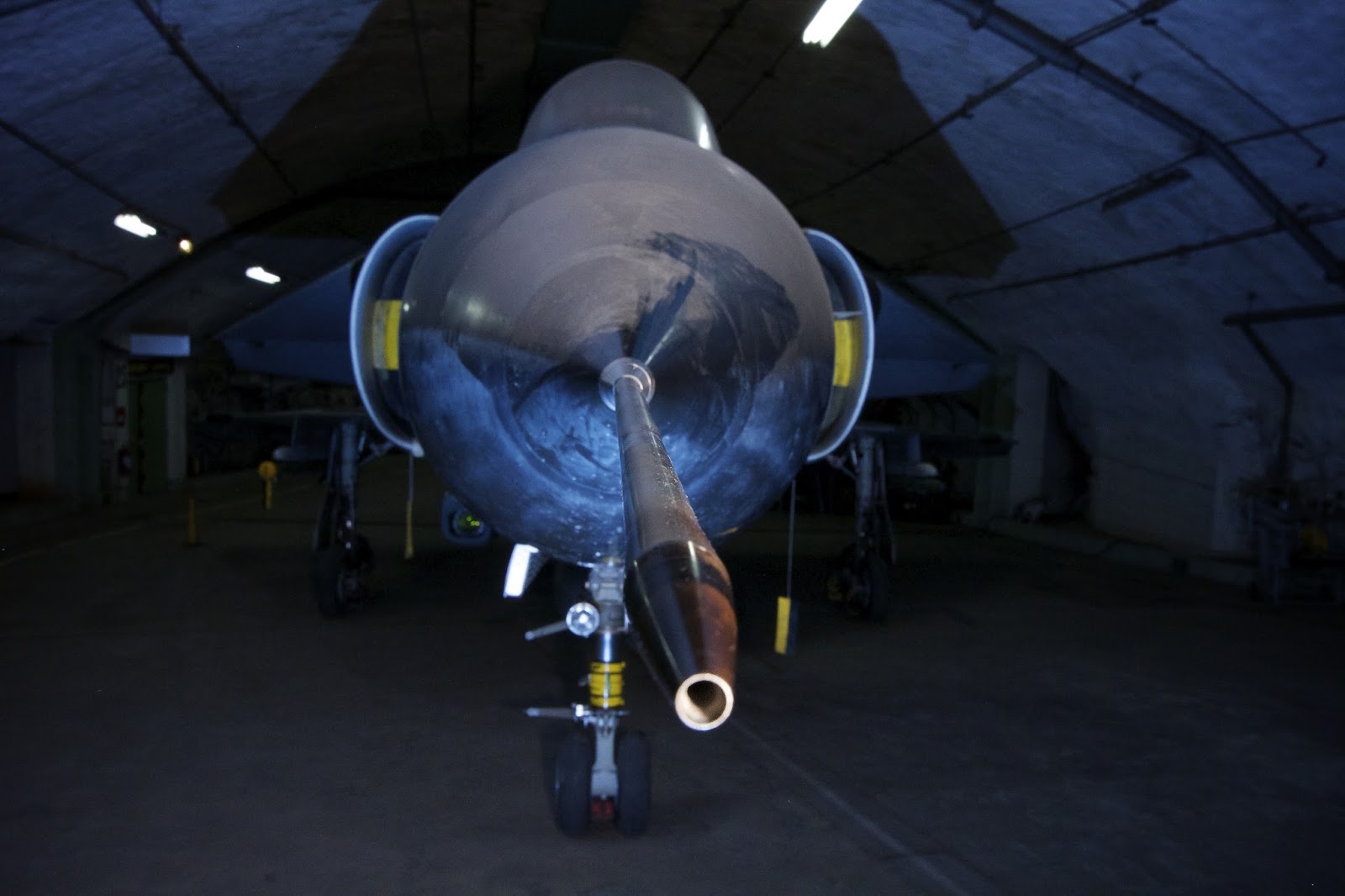 Next time, I'll bring a duster. 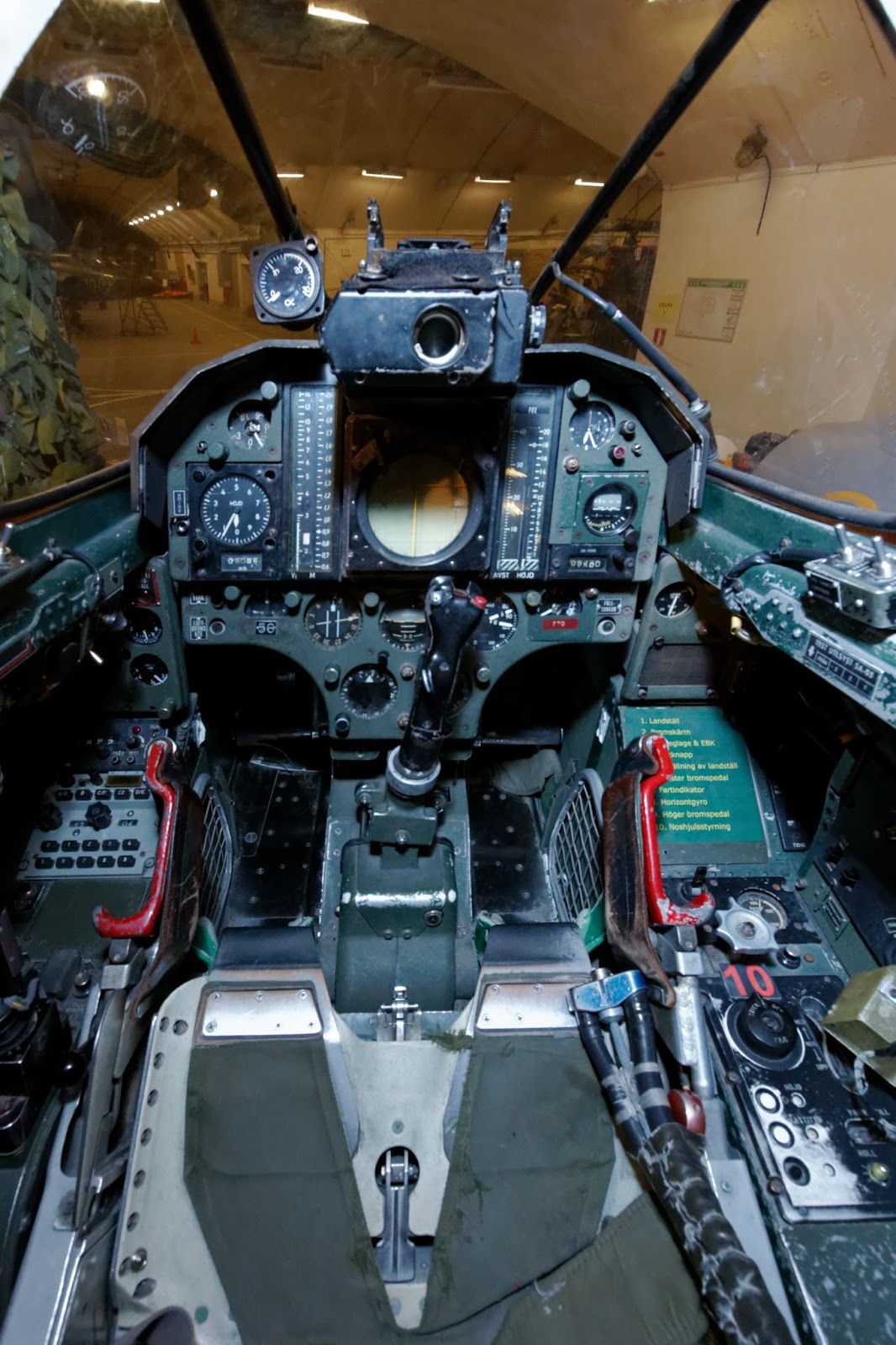 The cockpit of a SAAB J35 Draken (Dragon). 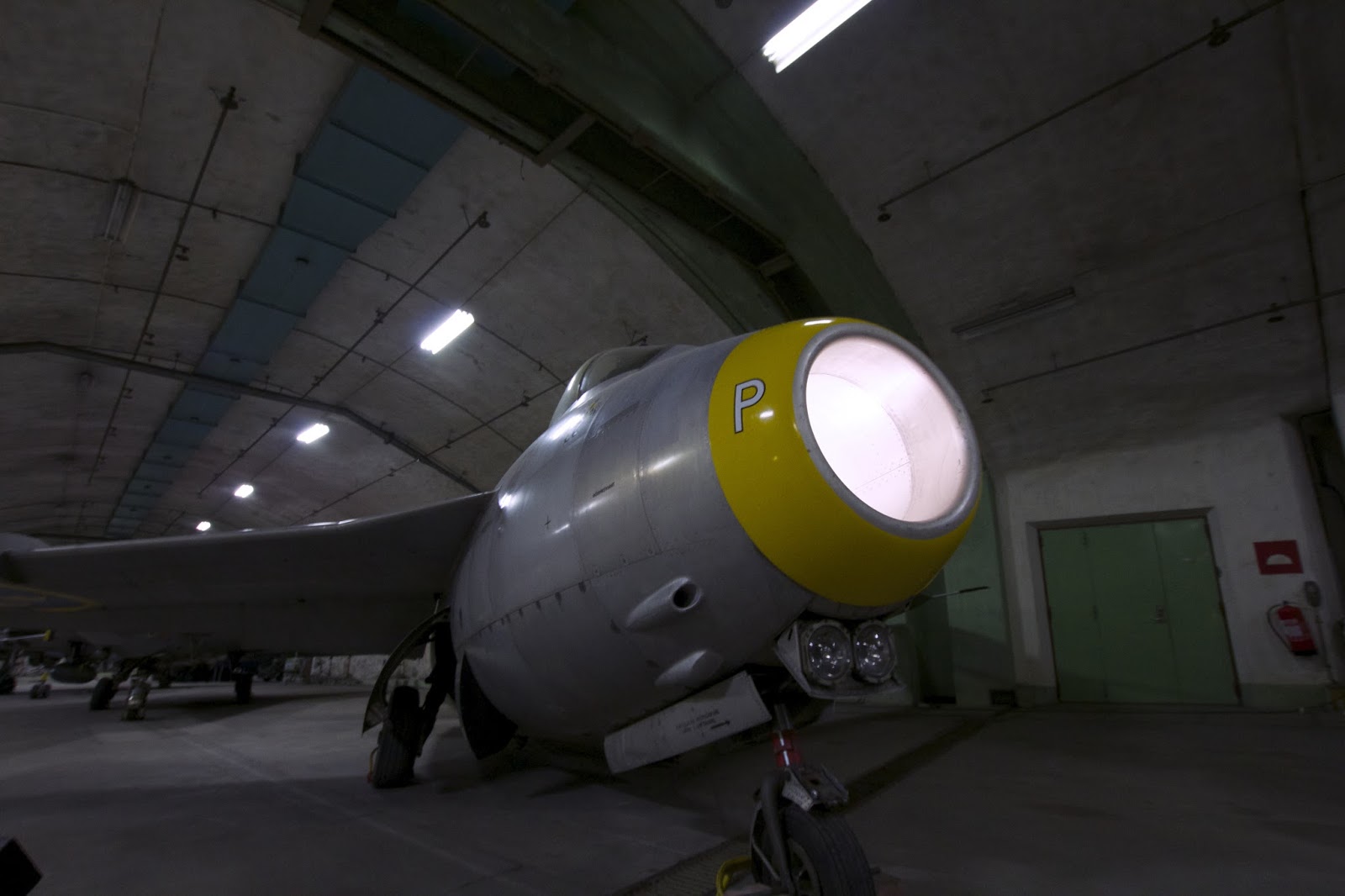 The J29 Flying Barrel is one of my favorites. I did the flash-in-the-engine trick again with this one, to make the picture a bit more interesting. 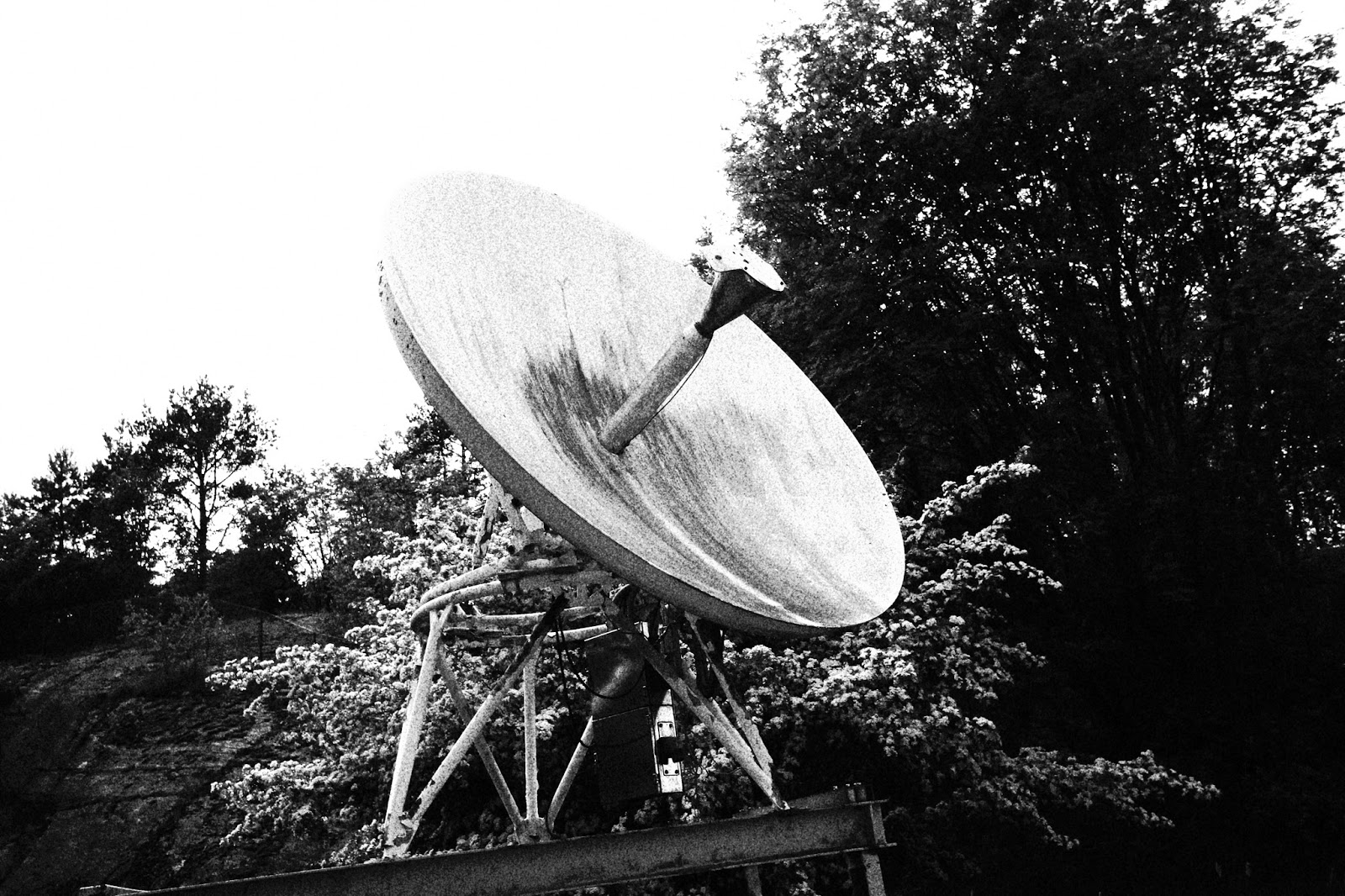 My previous post was about obsessive repetition of patterns. I could not resist adding a few shots to my Whiteout series. 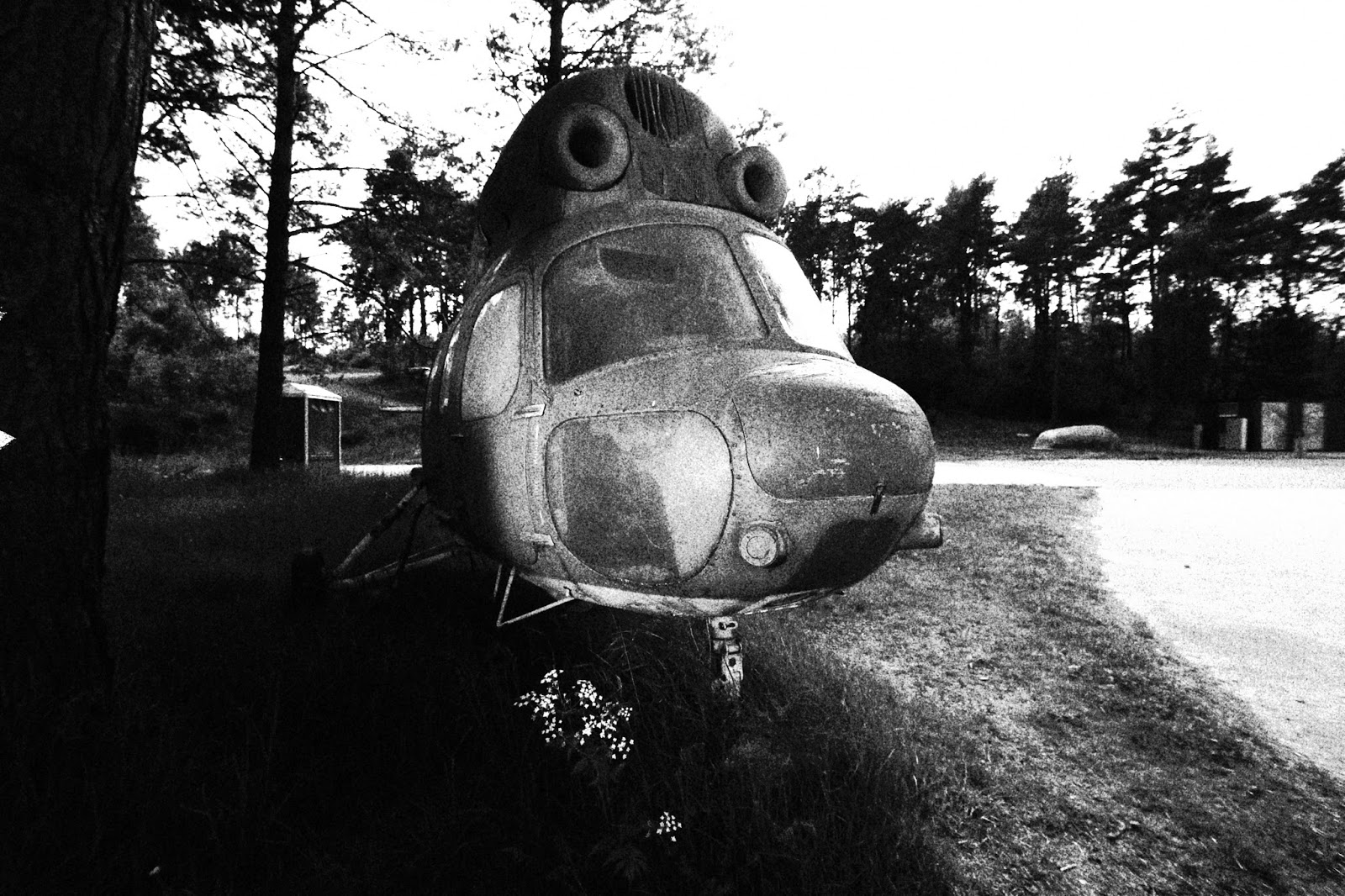 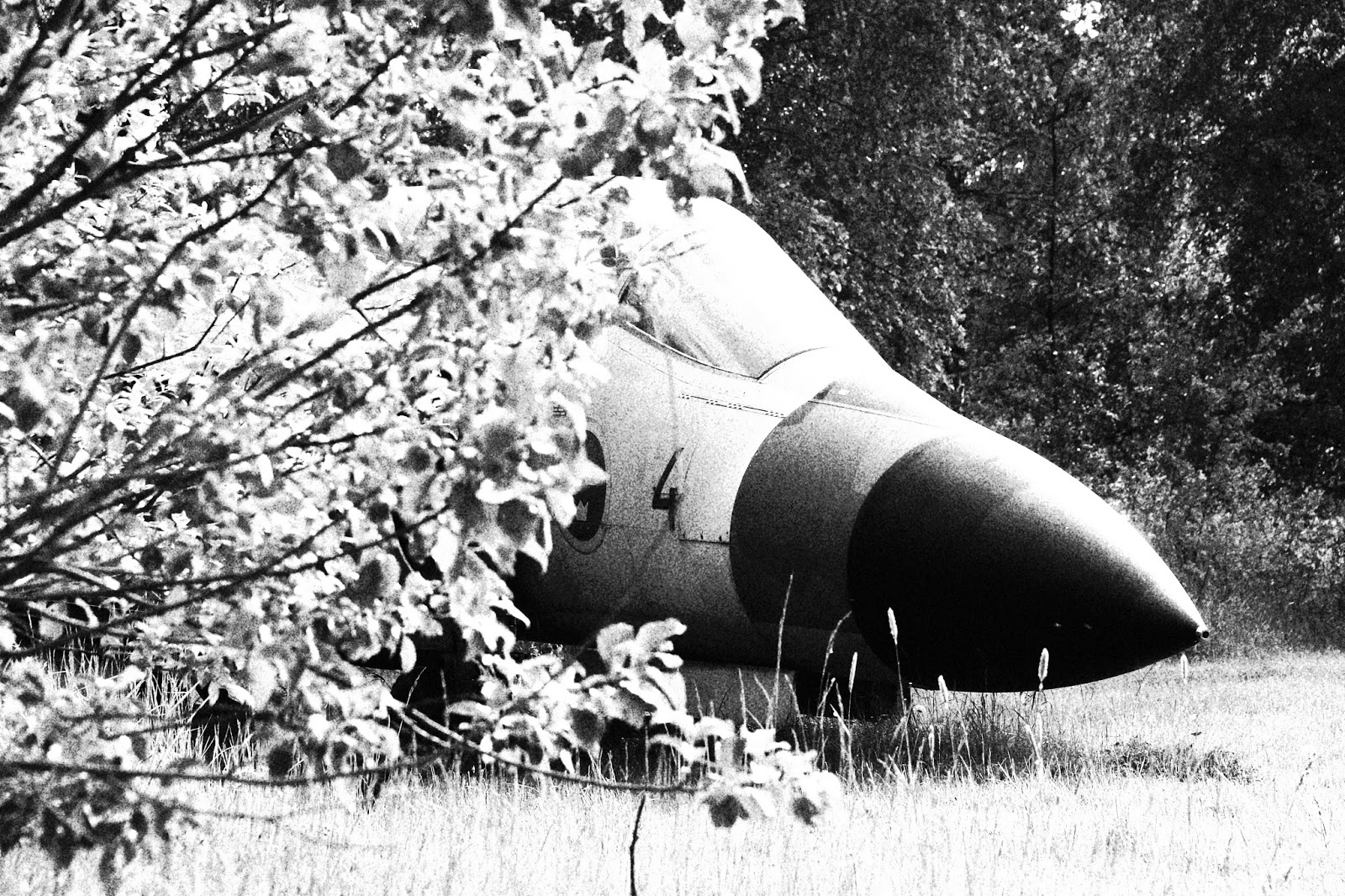 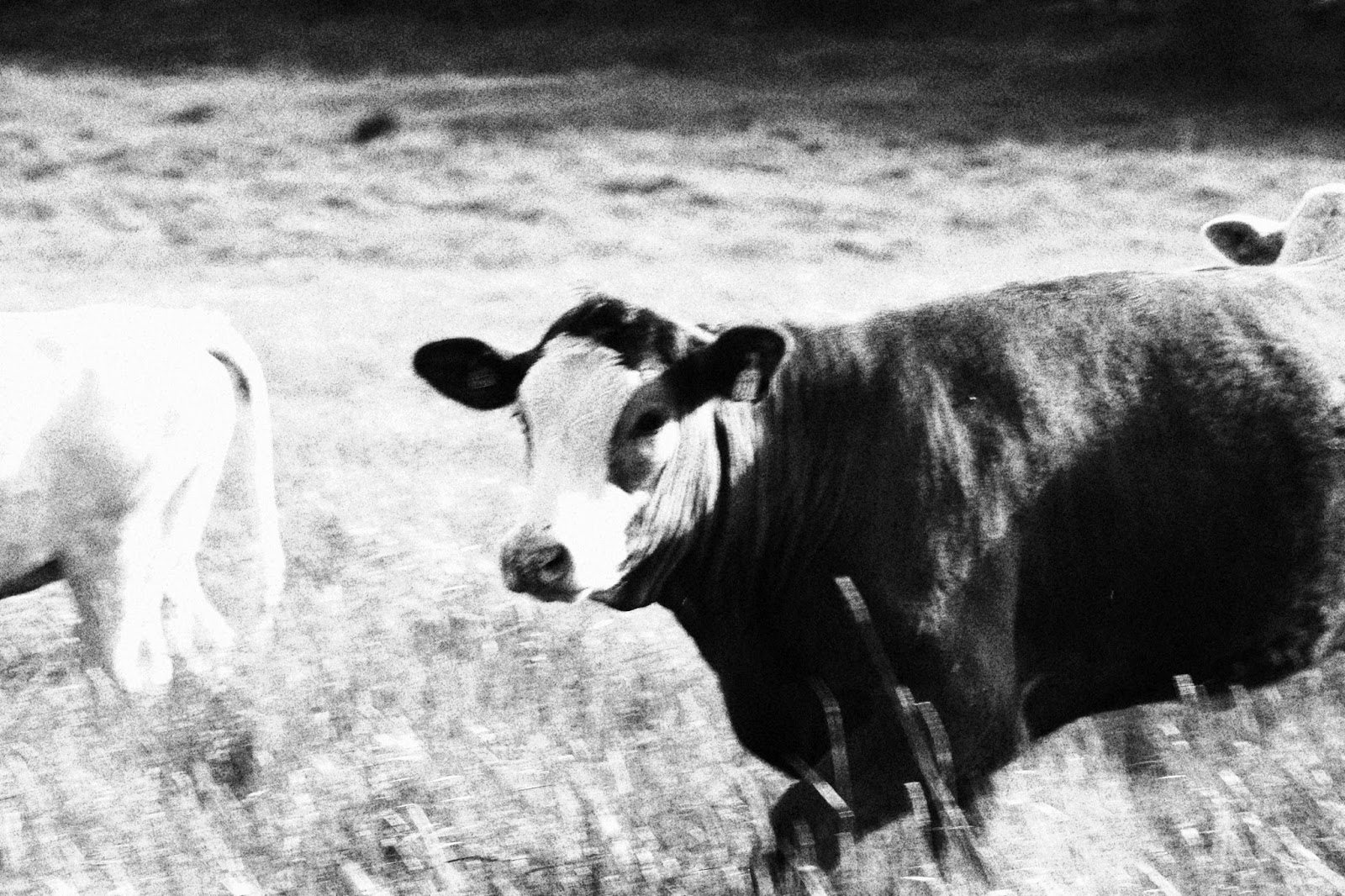 Cow? Well, yes, there were plenty of cows in the fields outside the Aeroseum area.

As you can see, when I left the Aeroseum, I provided a bit of entertainment for the cows. They gathered as close as they could get, to see me walk along the road, with my camera and my giant backpack.

Posted by Kallokain at 23:20 No comments:

Once more: The power of repetition 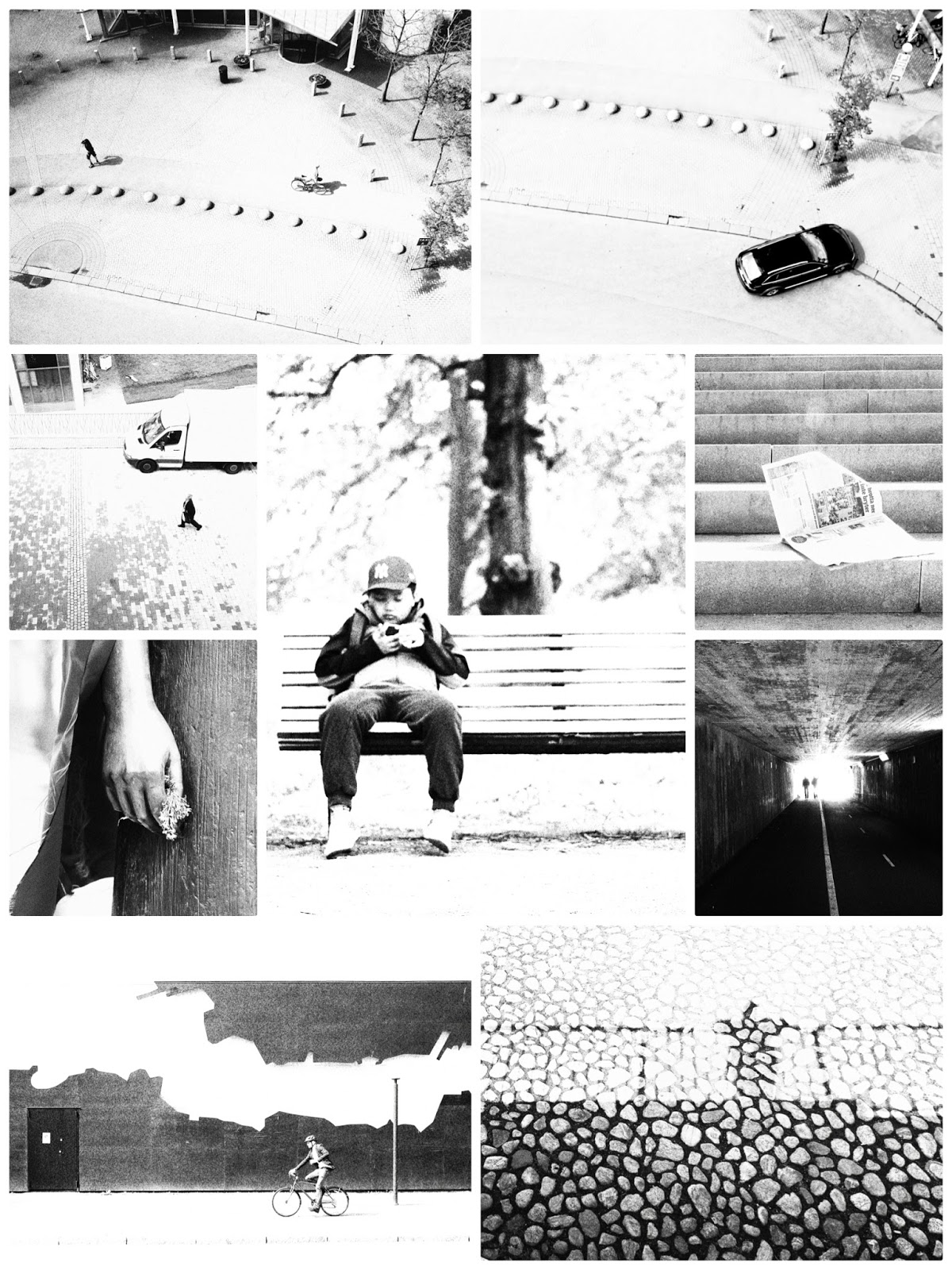 If you are a passionate photographer, you will sooner or later find that you start obsessively repeating some part of what you do, over, and over again. This is natural. It is part of the learning process, at least, it is when you try to really grok something.

At the moment, I have at least two obsessive-compulsive loops in my head. One is about understanding lines, and finding the essential elements that make an image interesting.

The result is my Whiteout series: I have taken to deliberately overexpose by about a single stop, then use an in camera grainy, high contrast B&W filter to create photos with harsh black and white, and most of the details washed away. 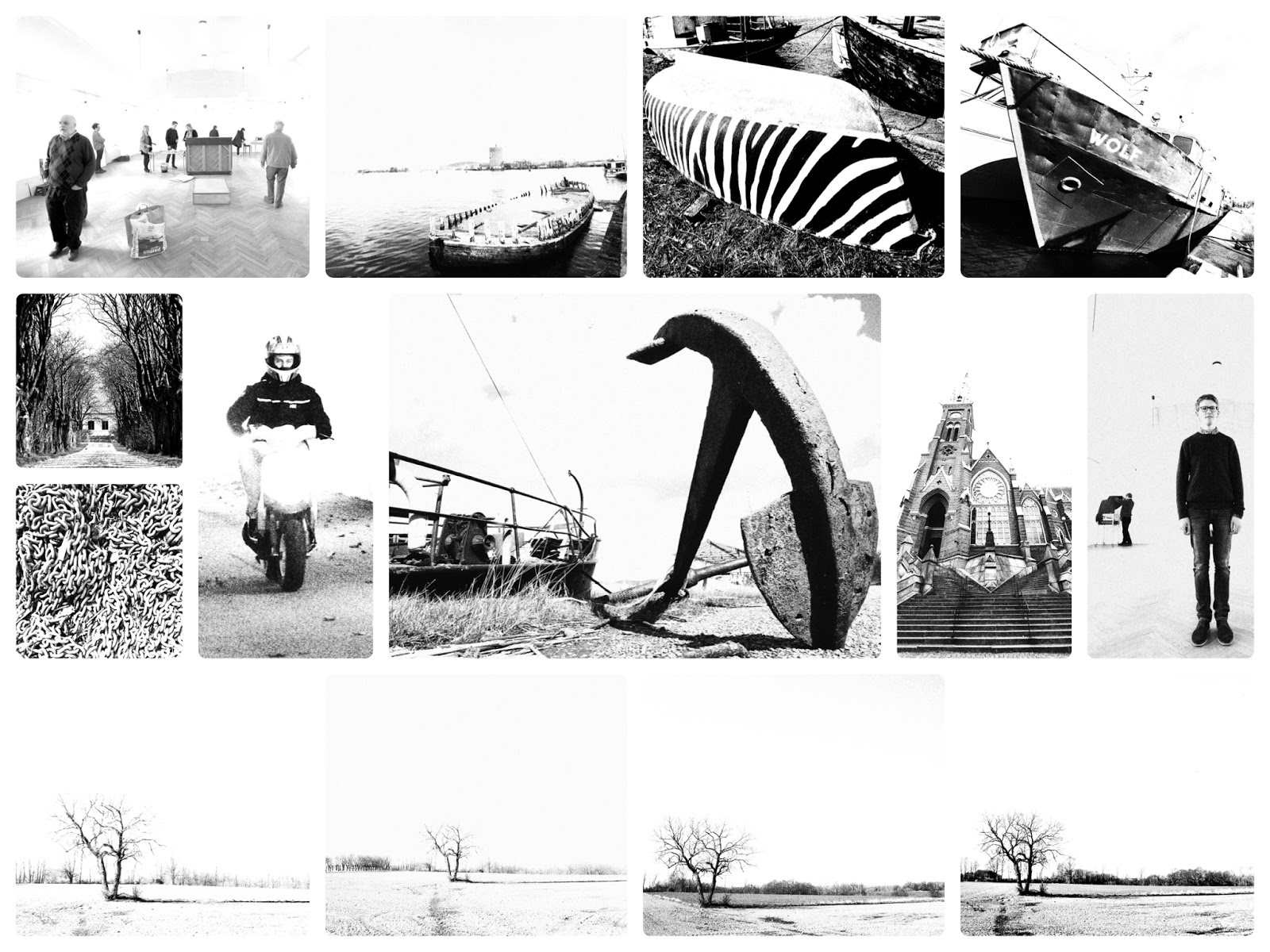 Repetition is the key to learning, and repeat I do. Time will tell what, and if, I learn.

When I started the Whiteout series, I was convinced nobody but me would be interested in it. As it turns out, that was wrong. The photos are much more popular than I thought they would be. Perhaps it is because of their simplicitly. They are restful, have clearly defined points-of-interest, and the drama is in the contrast, not the imagery.

The other loop that goes around in my head is different. 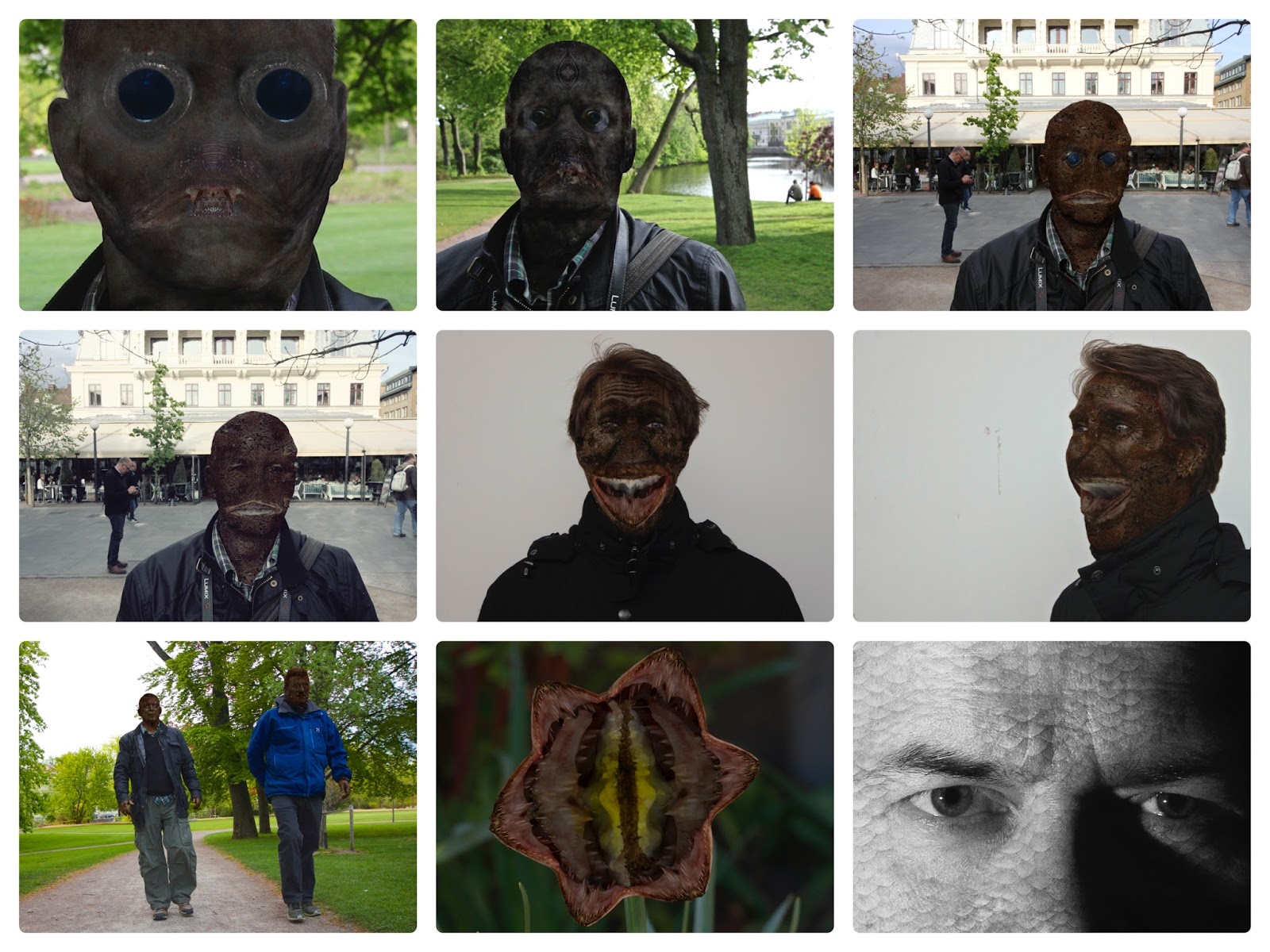 I am trying to build a Deep One, a monster from horror author H.P. Lovecraft's Cthulhu mythos. The photos above are all training for Horror Noir a photo project I am working on with some friends.

With the Whiteout series I do not have to do much studying. It is mostly about practicing things I already know in theory.

The Horror Noir project is different. I have set up Pinterest boards to study Film Noir & Horror, how to build creatures, how to use Pixelmator, Lovecraftian monsters, comic book drawing and design, and how to use the 3D software Blender.

In addition to that, I study:
And that is just the beginning. I read, shoot, and practice with Pixelmator, because the better we do it, the more fun it will be.

You never really finish conceptual spirals like these. Instead, for every new loop, they mutate, split, or join with other spirals, becoming something new and fresh, and different, interesting, that must be explored...

Though I sometimes reach plateaus, or even regress, if I keep pushing, it'll be worth it, not for the goal, but for the journey itself.
Posted by Kallokain at 13:01 No comments: 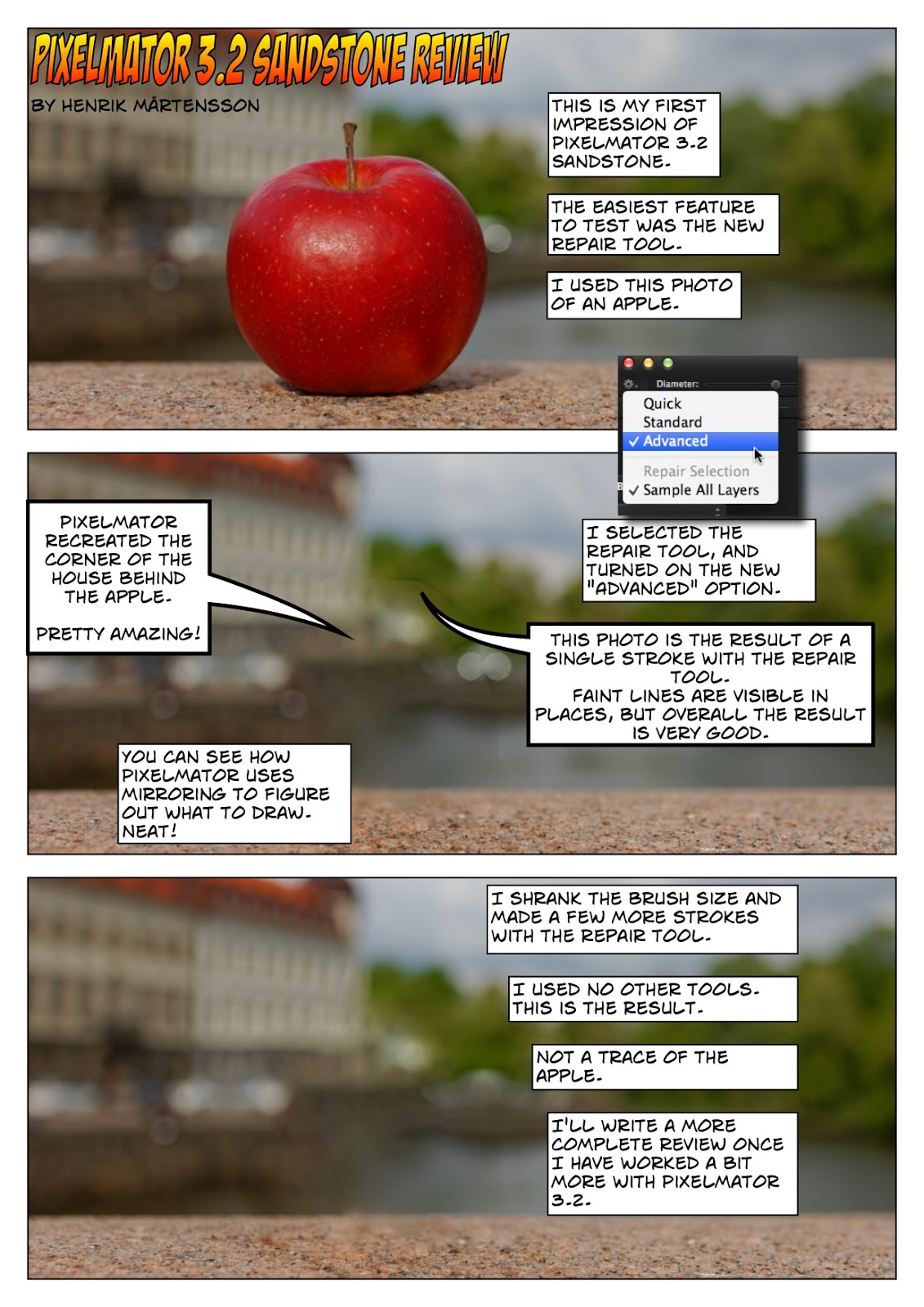 I just downloaded Pixelmator 3.2 Sandstone. I did a quick test with the completely rewritten repair tool. Very impressive first results.

I'll write a more comprehensive review once I have had a chance to use Pixelmator 3.2 in a real project.
Posted by Kallokain at 06:42 No comments: