The picture above, Jungle Pickup, caused a stir when I published in in an art group on Facebook. Here is an example of the comments I got:

Well, at least one sword and sorcery trope was fulfilled: weasily, weak men using cheap shots to attack their betters.

There was plenty more like that, and several suggestions that I ought to leave the group. So, what had I done that so offended people? When I posted the picture, I wrote the following:

Jungle Pickup, a.k.a. Catch of the Day

Much as I love Fantasy illustrations from the 60's, 70's, and 80's, there are some things I find a bit annoying.

One of those things is the trope of a huge warrior, sometimes a skulking ape-man, walking with a terrified woman slung over his shoulder.

I do not like it because the narrative is one of horrific abuse instead of adventure, and causing pain and degradation, rather than triumphing over dangerous obstacles.

So, I decided to flip the story around. Note that who carries whom, is not the only thing I flipped.

The response for the picture was mostly positive. There were more than 70 likes, which is good for one of my pictures in that particular group.

I'd like to stress that most comments were either positive, or straightforward questions about the picture. I appreciate those a lot!

There were also several negative comments, and I found them both revealing and disturbing. Not one negative comment was about flaws in the picture itself. Instead, the comments were about misogyny, and the commenters attacked me for being against it.

Let's have a look:

The first sentence is a good example of a well known logical fallacy, the Straw Man Fallacy. I stated that I find one particular Fantasy trope annoying because it is misogynous. The commenter narrowed that down from disliking a trope to one particular artist, Frank Frazetta, and then broadened it to encompass all of Frazetta's work, and the entire Sword&Sorcery genre. He also eliminated the key part about misogyny. For good measure, he also changed "a bit annoying" to "hate".
It is clear from the second sentence that the writer believes disliking misogyny, abusive behavior towards women, to be "left wing politics", which the writer is not fond of.
In other words, the commenter defends abusive behavior towards women in Fantasy art and literature, and tries to hide what he is doing by first misrepresenting my original statement, and then associating it with political views he believes are disliked by many in the group.
There was another person who jumped in to question the above statement. I'll leave his comment out, but I will include the above commenter's reply: 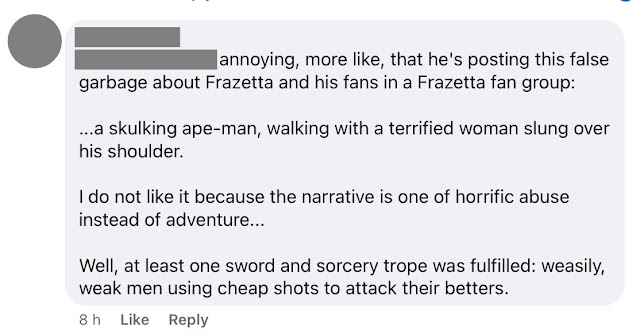 Again, the straw man attack, followed by an Ad Hominem, i.e. a personal, attack.
I stated that I dislike a Fantasy art trope because the narrative is about abuse towards women. There is no attempt in the first, or the second, comment to refute the argument itself.
Let's move on. 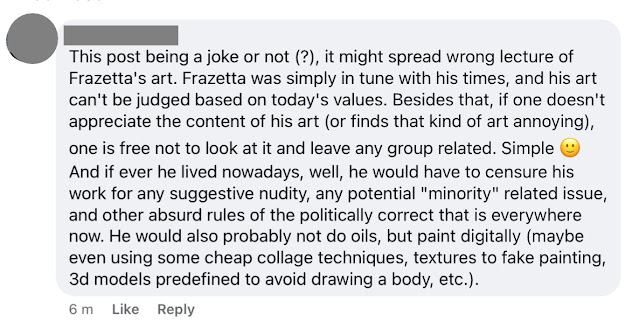 This is a better disguised straw man attack. At first glance, it looks like there is a reasonable argument here, but it is still an argument based on the false assumption that I attacked Frazetta's art. It is still an argument that attacks my dislike of a misogynic trope, even though it is an attack in disguise. The comment is intended to obfuscate, not to present a relevant argument.
It is a bit ironic that if you really look at Frazetta's art, there are plenty of strong female characters in it. A few examples:
Frazetta had a very wide range as an artist, so you can find just about any type of human relationship in his work. The presence of strong female characters is one of the things that I have always liked about Frazetta.
Judging by the comments, the Frazetta defenders I have quoted in this post, would actually be quite upset if they saw the strong and capable women Frazetta drew and painted.
Speaking of irony, I'll include one more comment:

Frazetta is one of the greatest narrative painters ever. Not everything he did was narrative art, but if you look at his greatest works, most of them are narrative art.
If posting narrative art is a reason for leaving the group, then the Frazetta family would not be welcome to post Frazetta's narrative art in a group for Frazetta-inspired art.

The question is, why these attempts to defend a trope showing kidnapped, abused women?

I checked the home pages of some of the commenters. The first page looked fairly normal. The first post of the second page was a recommendation to see an action movie that featured two rapes at the beginning.

I really did not want to check any further.

From time to time I work with female models, and they see and hear, and experience, a lot worse things than the above. They have to be very careful when meeting an artist they haven't worked with before. When the work they have contributed to is published, they are often subjected to denigrating comments. Misogyny is quite common in the art world, both among artists, and audience.

I am very well aware that a blog post like this does very little to reduce the misogyny that exists in the art world, and our society at large. Still, it is important to talk about it, to recognize it for what it is, even though arguments are disguised, or so silly they are difficult to take seriously.

The idea that men and women have equal rights, which includes the right to be respected by, and well treated by others, has not yet taken hold as strongly as it should have.

We still need major changes in our social systems and our attitudes, but I do believe small changes matter too. Misogynists should be opposed, in small matters, as well as large.