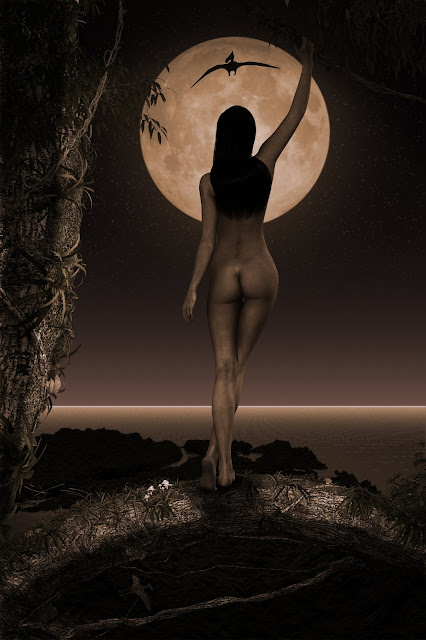 Yesterday I uploaded the first version of Jungle Moon. Then, of course, I had to go back and tweak it.

I had shown the picture to a friend of mine, Petra Brewitz, and we talked about some of the finer details, like tilting the hips a little bit to bring out more curvature, and changing the color of the hair.

The idea is to raise questions. Rather than showing "nude woman standing on branch in tall tree looking at the moon", and viewers just accepting what they see, I want viewers to ask questions and create possible answers, like:
There is no single right answer to any of these questions. It is possible to construct an infinite variety of stories that lead to this moment, with a nude woman looking at the Moon while standing on a branch in a tall tree.

What happens after, depends on what has lead up to this moment, but the story can take a radical turn. She may slip and fall, or the quetzalcoatlus flying towards her may attack. Or, less dramatic, but maybe leading to even greater impact on the story, she is there to think things over, to make a decision, something of importance to her, and perhaps to others.

So, by adding a quetzalcoatlusflying towards her, and another in the lower part of the picture to show that the first one is not alone, it is part of an ecosystem, not some random monster, I have hinted at a story, and maybe even a connection with a previous story. If there are connections with previous stories, then there are possible trajectories, and thus possible future stories. I can tell the stories, or provide glimpses of them, or be silent.
Posted by Kallokain at 02:06